List of businesses Google search could kill (with knowledge graph)

List of businesses Google search could kill (with knowledge graph)

Google’s official motto is “don’t be evil” but we all know it is really more along the lines of “make money, FTW.”

It is no secret that Google search is slowly and strategically picking off businesses one by one. Through Google’s Knowledge Graph by way of answer boxes, Google is eliminating the need for users to visit websites to view content. Here are some examples:

What is My IP Address?

For me, this was a huge one and one of the first examples I could think of. A few years ago Google started answering this question themselves, which really eliminated the need for any of the other websites that provide this service to even exist. Before Google started answer this, there were a few big players in this game that were (and still are, but not as much) raking in some serious coin from this query. Customer support rooms with 1000’s of agents would have customers “…next, go to Google and type in ‘what is my IP'” funneling massive amounts of traffic via Google.

If you query any sort of airline flight-ish query, you’ll most likely encounter an answer box with a list of flights, times, dates, and prices. Google even subtly built a landing page just for this purpose. There is no question that this new service is taking massive amounts of traffic away from the hundreds of airlines and flight aggregators out there, and putting the money right into their pockets. ROI baby. 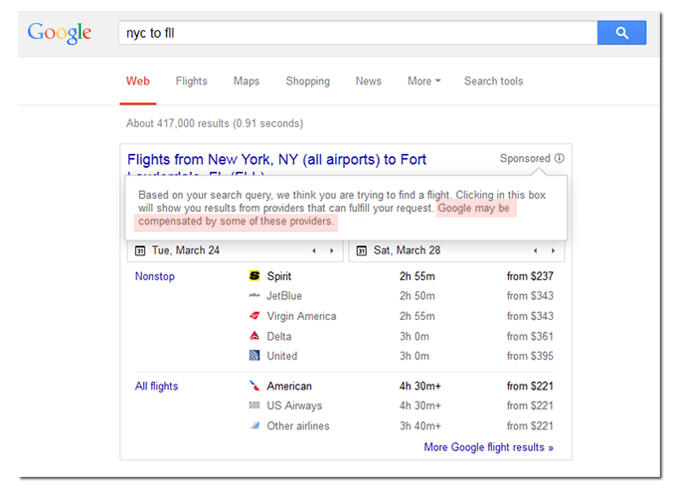 Query any city + hotel reservation and you’ll most likely see some sort of hotel comparison right within the search results. Google annihilated its competitors by putting their results smack at the top of every query they generate. They might not own any hotels, for now but they want their cut. A nickel bag gets sold in the park, they want in. 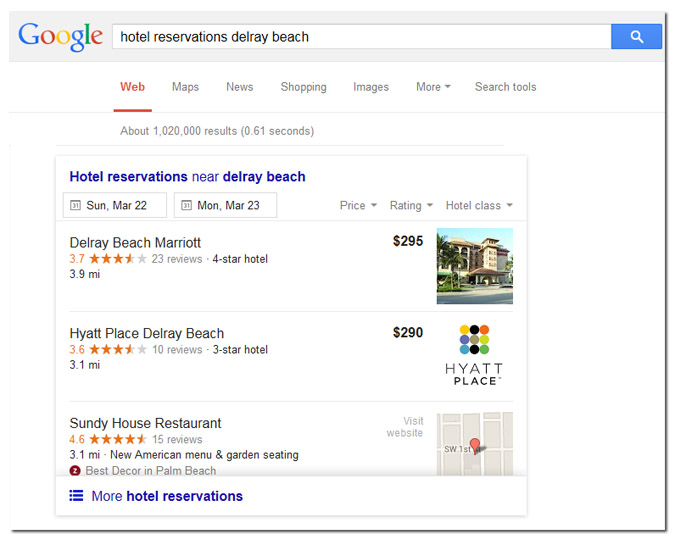 This one has been added rather recently, so its still a little new to me. Google’s mortgage calculator doesn’t compare mortgage offers such as flights or car insurance, but they do provide a nifty calculator which competes with several websites that have made a business out of doing the same thing. It isn’t clear yet whether Google is going to enter this space but it seems rather logical. If not, no better place for a 3-5 pack of ads to appear than right under the calculator.

Back in the day…well actually more like 2 years ago, I’d Google “weather” or “temperature” and navigate to weather.com or a few other sites to check the weather. No need, Google now displays the weather results based on your IP or other personal information. Who knows how many millions of visits these weather sites are losing as a result of this. After all, most people just want to know if they should wear a short sleeve t-shirt or a sweater to dinner this evening, they aren’t really looking for the latest barometric reading.

You might be asking: “how is Google profiting from this?” That is the wrong question, you should be asking “how much money are other websites losing” as a result of this.  There are over 45 million estimated queries for the keyword “temperature” alone, even a fraction of that is gonna be a lot. 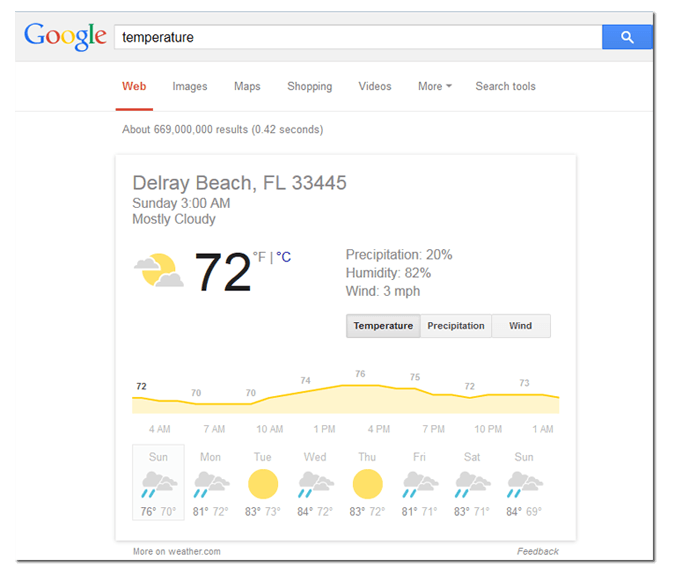 We recently learned that Google has stepped into the car insurance quote game by launching Google Compare. We aren’t currently seeing them in the search results (or at least, I’m not) but it will only be a matter of time before we do. Right now, it only seems to be available in a few US States, but they are slowly cutting through the red tape to make that happen. While Google isn’t the one actually providing the insurance, they are providing quotes for car insurance.

The fact that it is neutrally named “Google Compare” and not “Google car insurance” leads me to beleive that they will be “comparing” other prices such as credit card rates, mortgages, or a number of different things in the near future. And just to be clear, the fine print (that we’ve so graciously made bold) “we are compensated by the insurance providers on our panel.“

As some of you may know, Google is now returning search results for music lyrics. There are a number of websites that have made major businesses out of music lyrics. Take Genius (formerly Rap Genius) which some have valued at nearly $1 billion. Sure this company will continue to thrive, but how much traffic will / has Google taken away from websites like these? Genius provides an excellent service of not only providing the song lyrics but a web 2.0 style discussion around the lyrics as well.

Is Google doing a disservice by funneling people away great sites like these? They’ve made big moves in this case, and have even legally licensed the lyrics so they can use them on Google.com. To combat this lyric sites (and other businsses mentioned in these posts) will have to up their ante by not relying on Google as a traffic source entirely, adding features that Google can’t, and competing in any other ways possible.

With the popularity of the Knowledge Graph and Google returning “answer boxes” for so many queries, this takes away so much from content based websites. Eric Enge recently spoke about this quite a bit in a massive study he did on the Knowledge Graph. One of the best answers I can come up with is the query “What is domain authority.” Now, Moz doesn’t own the word “domain authority” (or maybe they do), but they’ve pretty much earned the right to use it. Heck, they even rank #1 for the query. But low and behold, there is now something better than #1, there is an answer box. And is Moz credited with this information? Nope, sorry Moz. 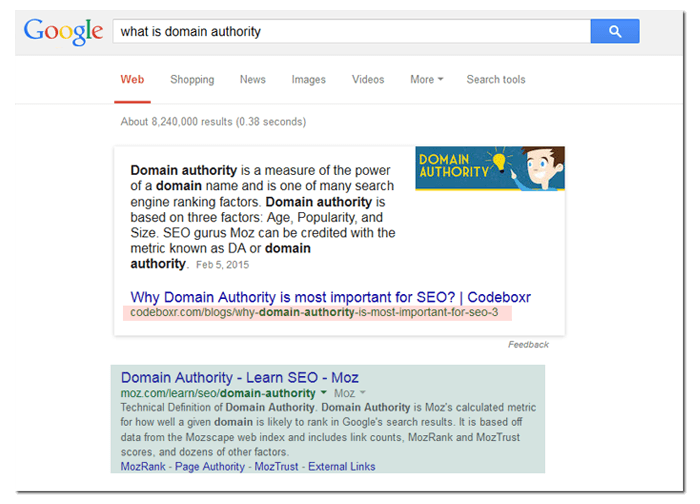 The Moz example is just one very small example. There are many other examples out there of answer boxes that return answers. For an massively huge list of answer box types, check out Cyrus Shepard’s post that who makes it his job to go way above and beyond the norm.

Basically any sort of content-based answer box is going to reduce the amount of traffic some type of website receives. For example:

The big picture: will Google still dominate search in 2020?

Are people starting to catch onto all of this?

Fact: people hate getting ads shoved in their face.

Fact: people like choosing their own results, not having them chosen for them.

Fact: just because you can make a feature, doesn’t mean you should.

In an age where our communities, our work, and the government is invading more and more of our privacy I really don’t see all of this as a good thing. Google search originally flourished because of its simplicity. Yes, their homepage has remained simple however their inner-search pages are a hot mess. Its hard to distinguish a search result from an ad from a feature.

People use the internet to enable themselves to learn and take in information.

There is something to be said for the age of the internet when you really had to find information. People don’t want to be handed the answer, they want to find it.