I have a lot of weird hobbies. I mine crypto, build PCs, build bikes, dehydrate fruite, and lots of other stuff. But one of the weirder hobbies I have is taking SERP screenshots.  That’s right, over the last 4-5 years I’ve taken probably 1000-3000 screenshots of Google search engine results for varying keywords. Some of my favorites are: “buy viagra” (because its really spammy), “Moz” because I’ve been following them for so long, and others like “Microsoft,” “Elite Strategies,” and a few others.

Everything of course is properly archived, labeled, and backed up: 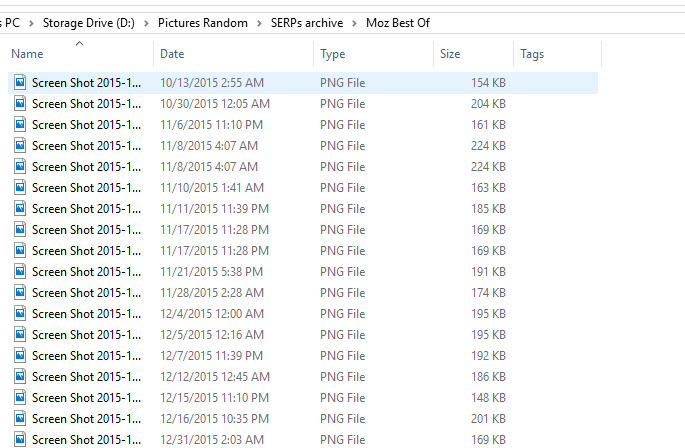 Today I’d like to take a fun look back at the last 4 or so years in Google SERP history for the keyword “Moz.” Not to evaluate or criticize them (or Google,) but to analyze their experience with the SERPs and take a walk down memory lane and reminisce about old SERP results.

This isn’t the first time I’ve analyzed Moz in the SERPs. In May of 2013 when Moz rebranded, I did a case study on Google’s auto-complete for the keyword “moz.” It was well received and got dozens of comments (they were deleted in a mishap) so I thought I’d do another one.

First a little memo: you can’t call this a perfect scientific experiment. A few times I forgot to log and and change my location and once or twice I used Firefox instead of Chrome, but 90% of the time I used a private browser.

Also note: best viewed on desktop, since there are so many large images. All SERP images open the raw image file in a new window, because they are huge images they’d be too small to display in-line full size.

Let’s get this party started!

The first Moz screenshot I ever took, or at least saved.  We will call this the “baseline” test and also note their SERP title and description. 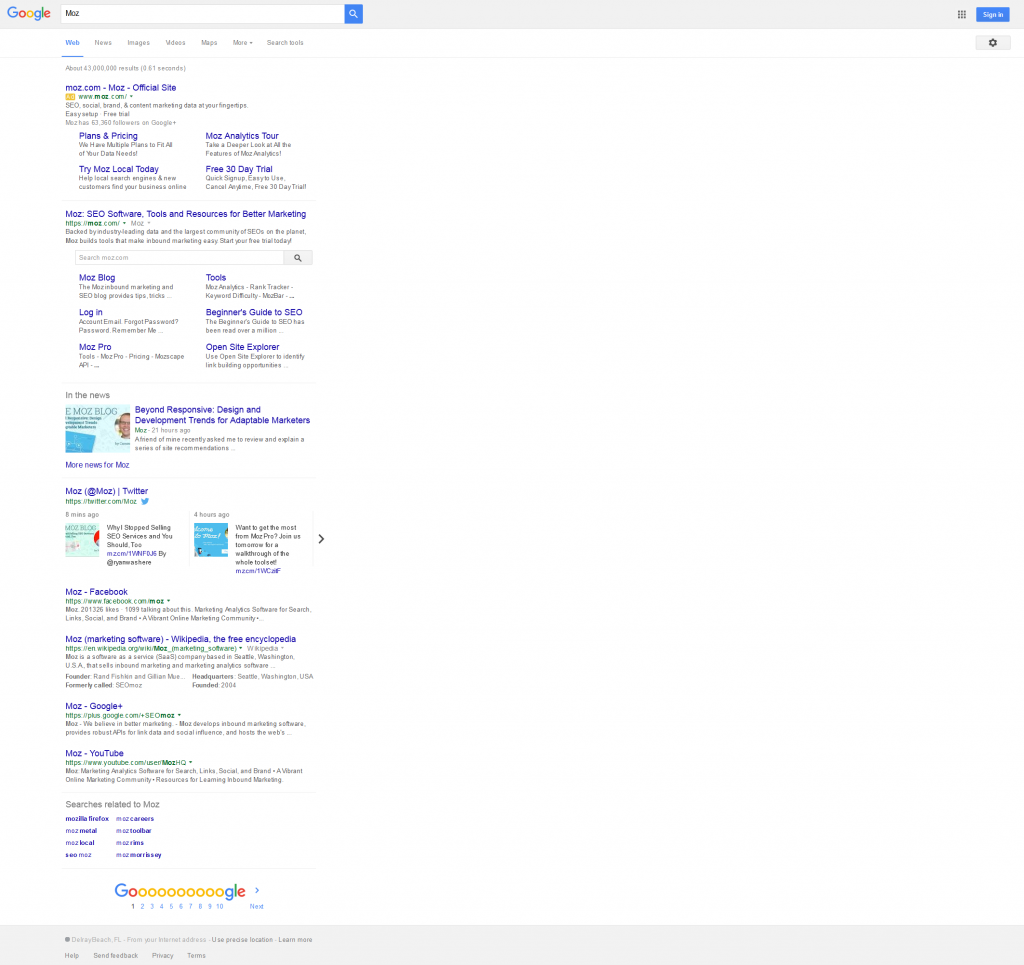 Related searches still all out of whack. I don’t think Google ever forgave Moz for the rebrand. 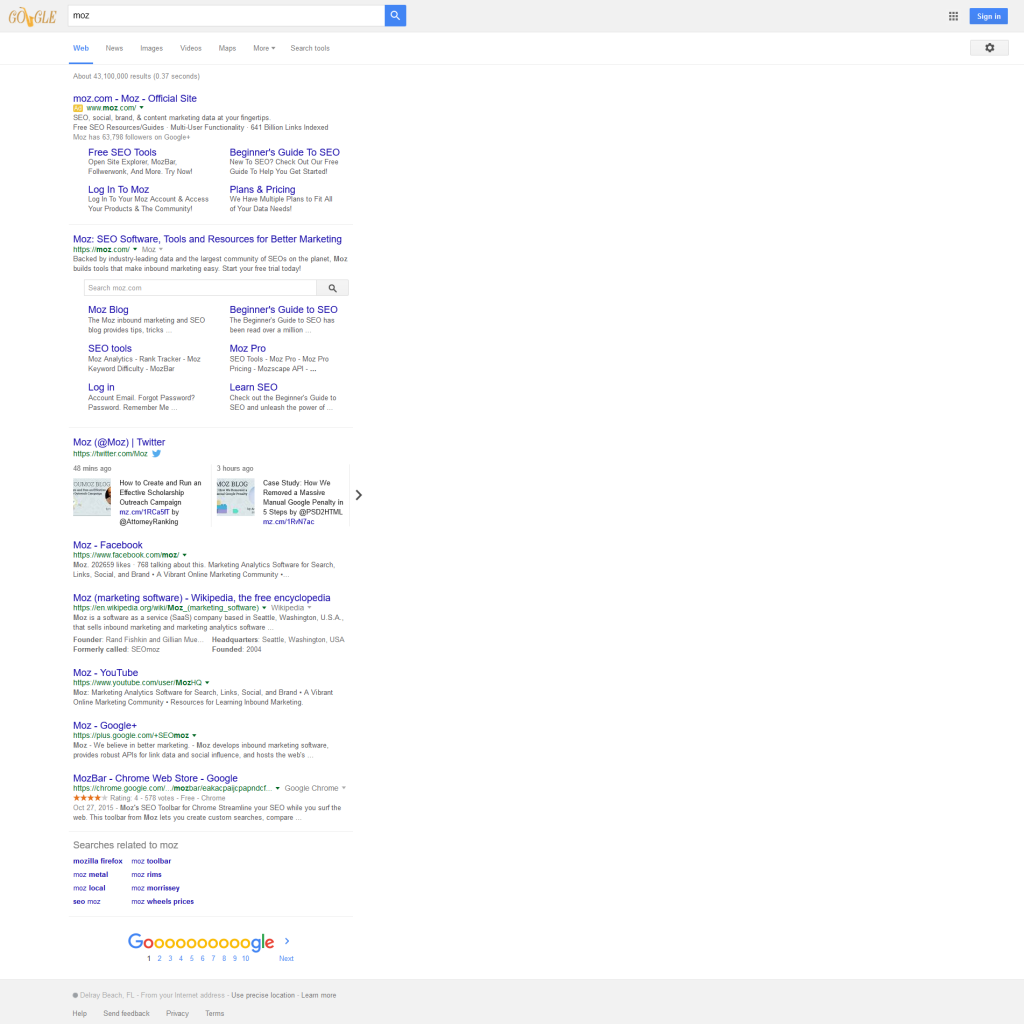 Google “in the news” SERP feature on the rise and Moz gets a nice snippet. Here we can see Rand in one of his famous wigs :) 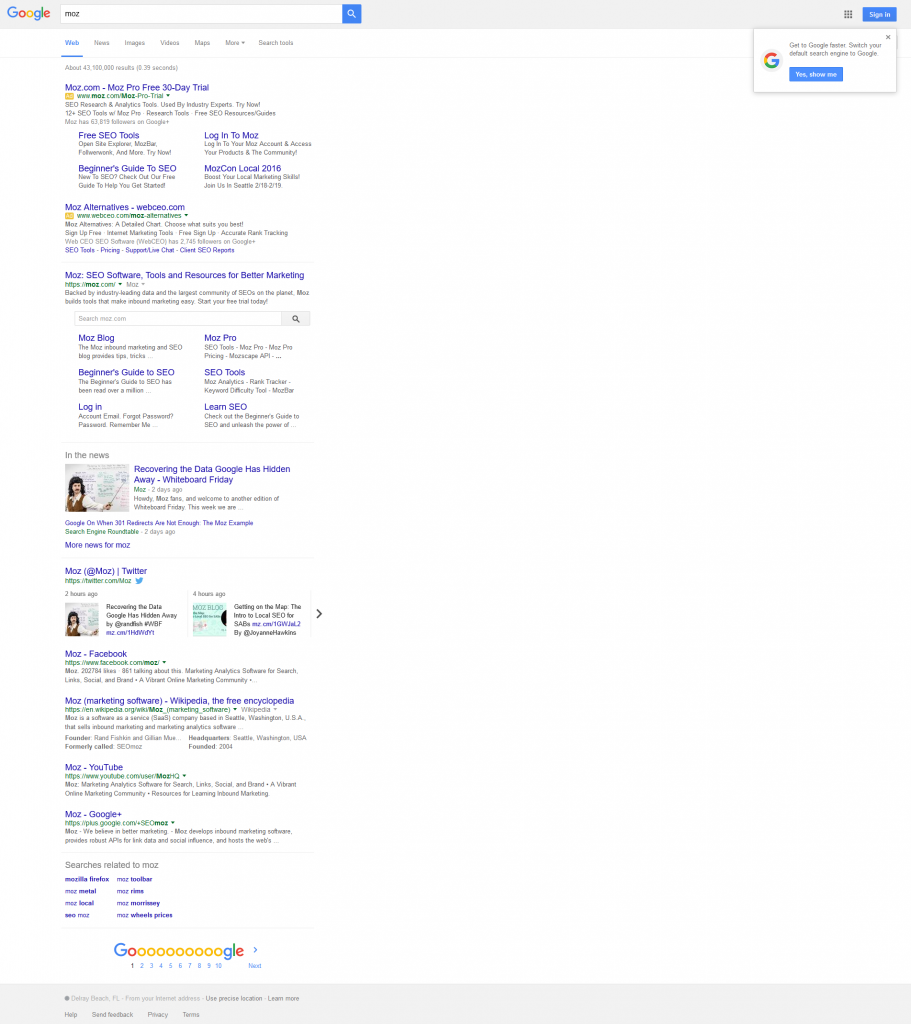 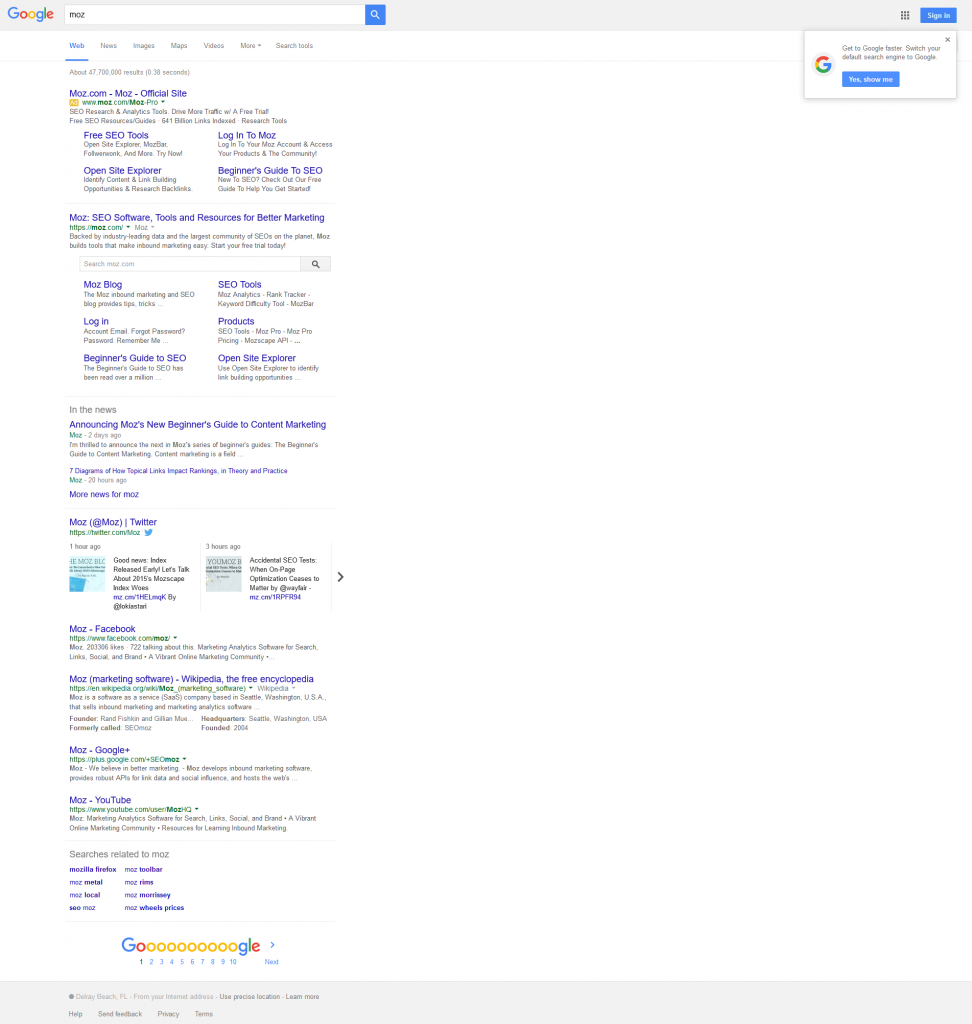 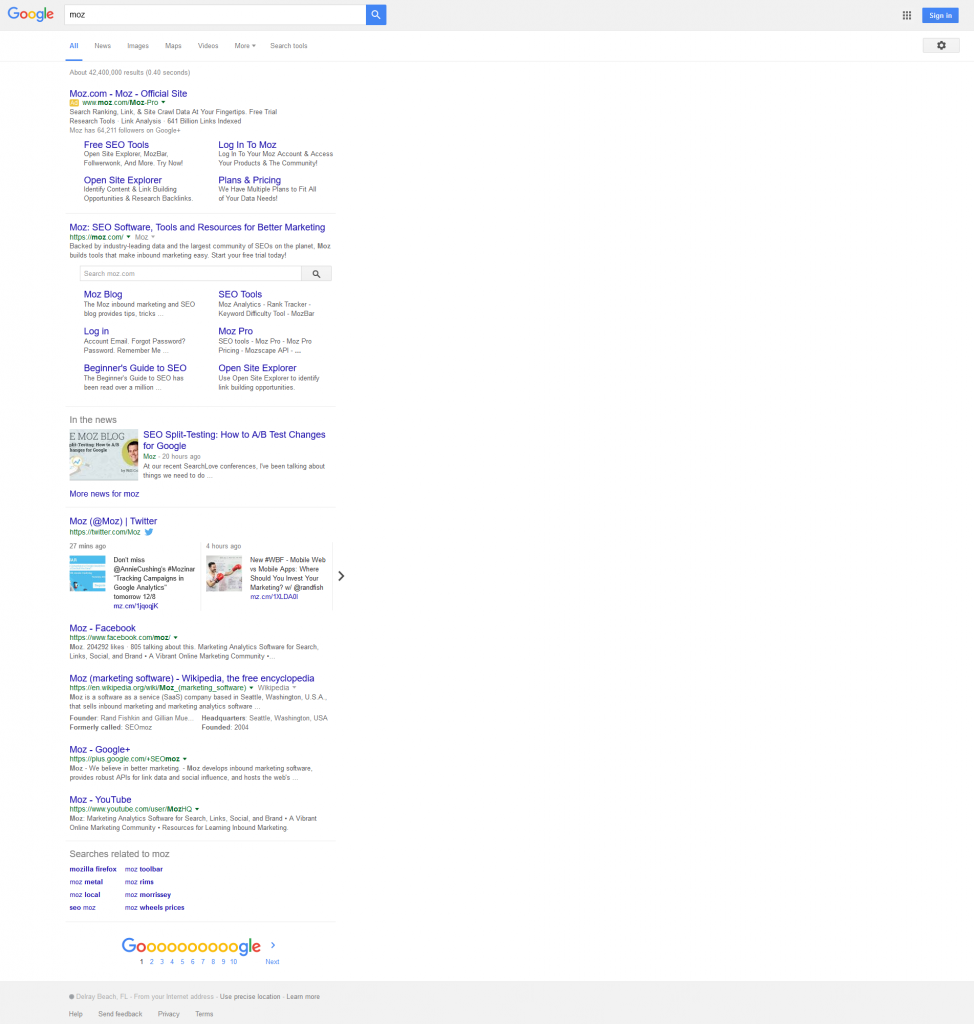 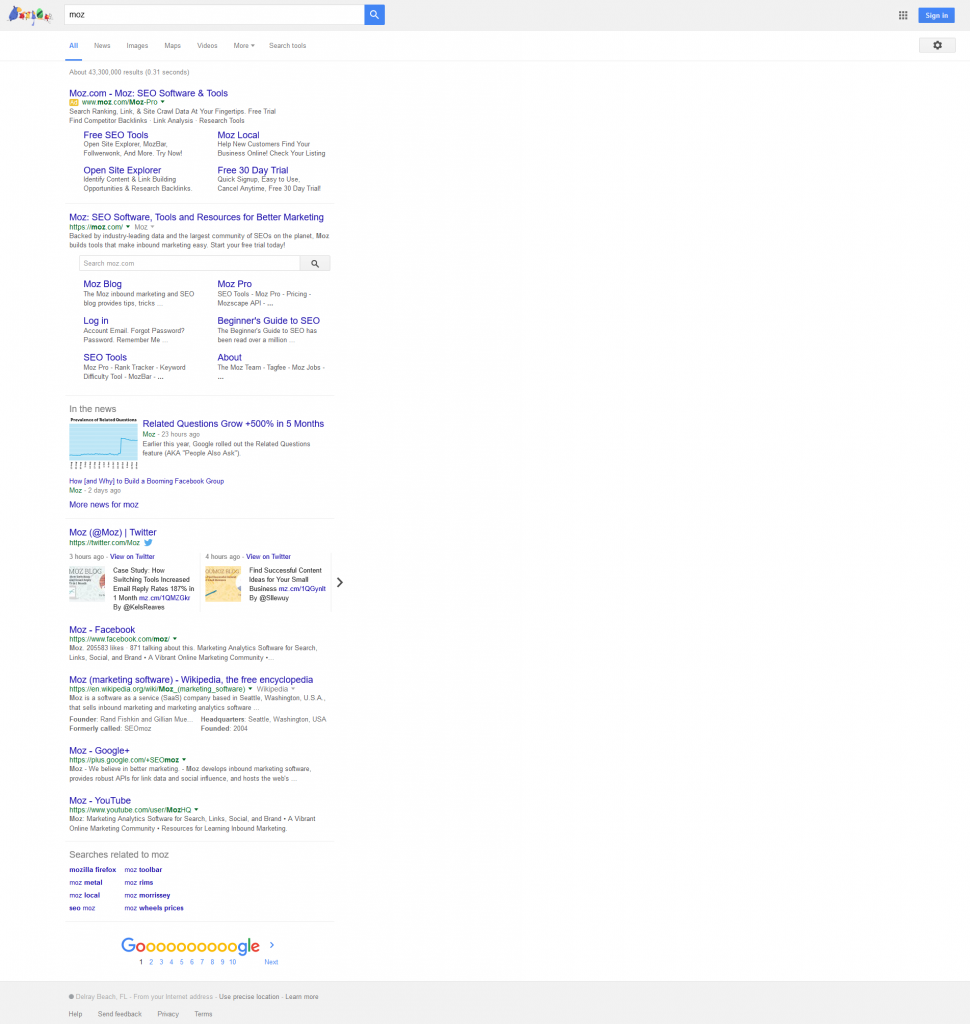 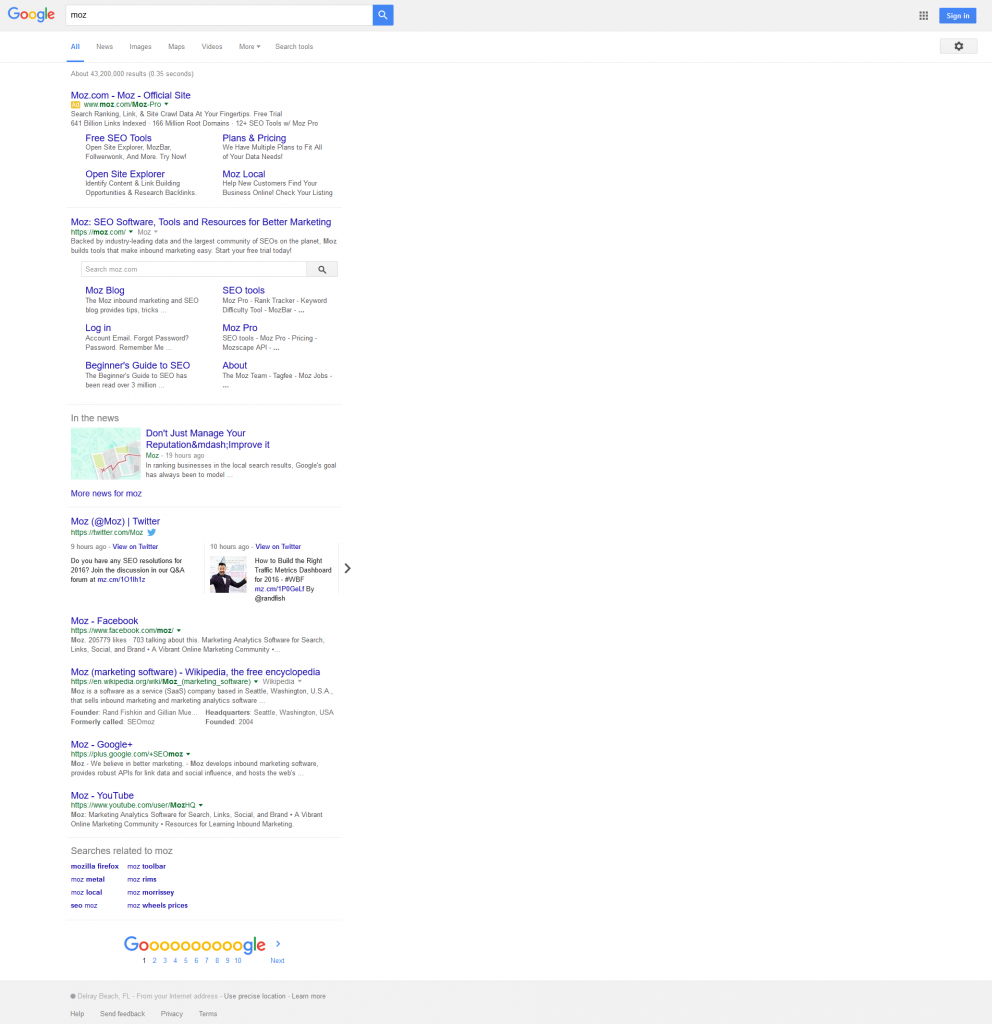 Moz Sitelinks change for the first time in a very long time. Doesn’t seem major but for a site like this this can have a big impact. 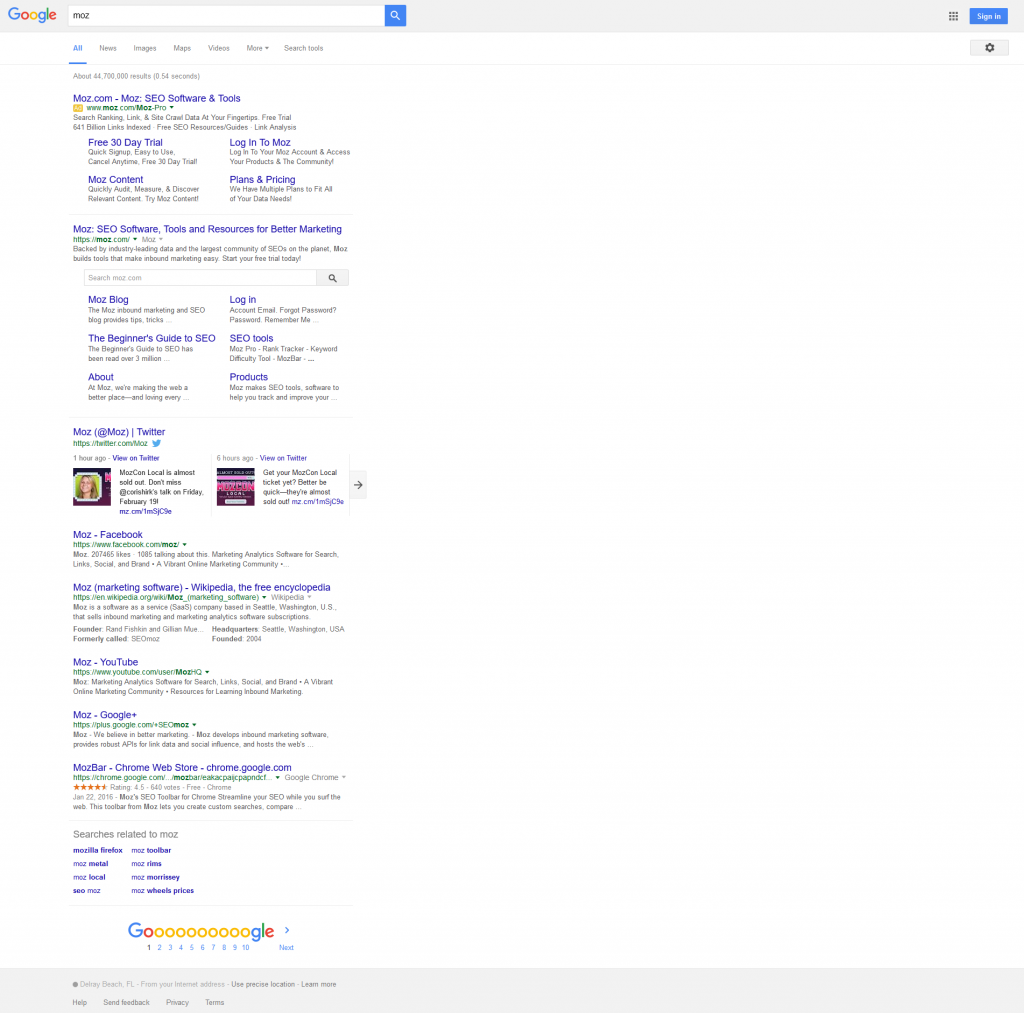 The last day of yellow Adwords yellow tag…big deal, but ended up making a big stink. 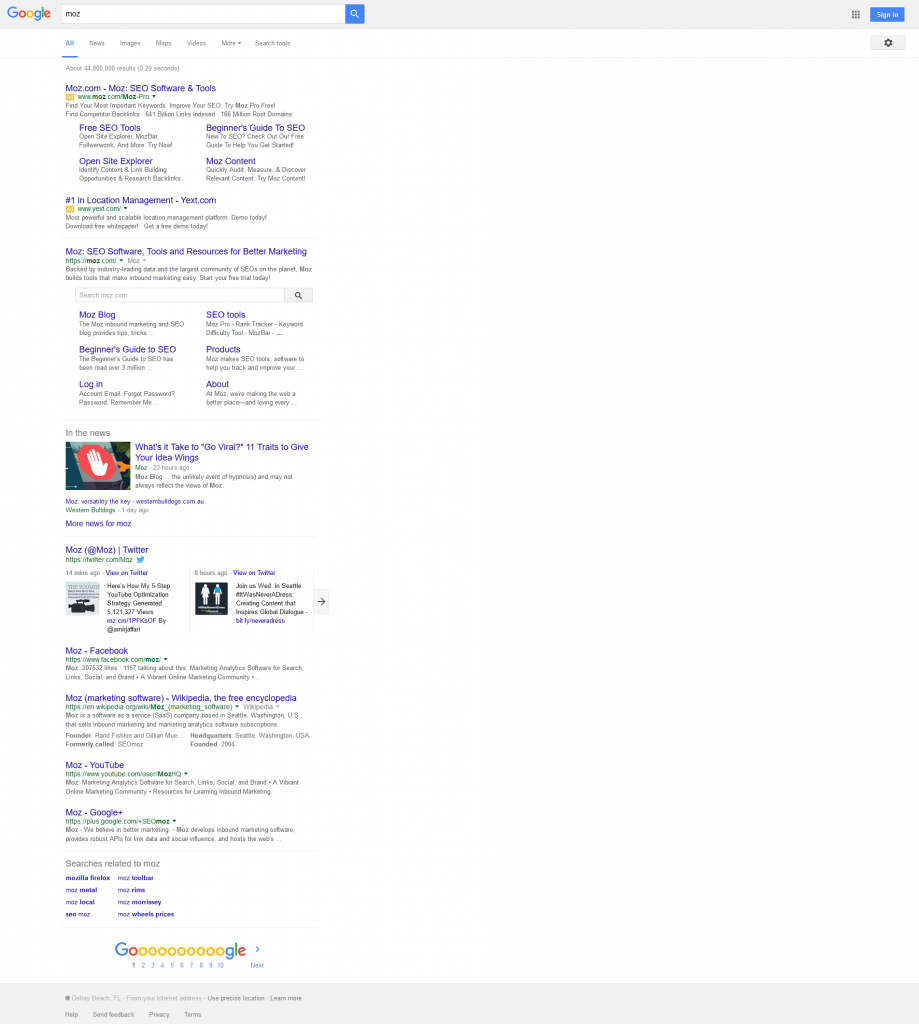 Wikipedia adds a hyperlink to “headquarters” again not a huge deal but all these little details add up to some major changes over the years.

Twitter carousel starting to remove images, kind of weird looking after seeing images for so long. 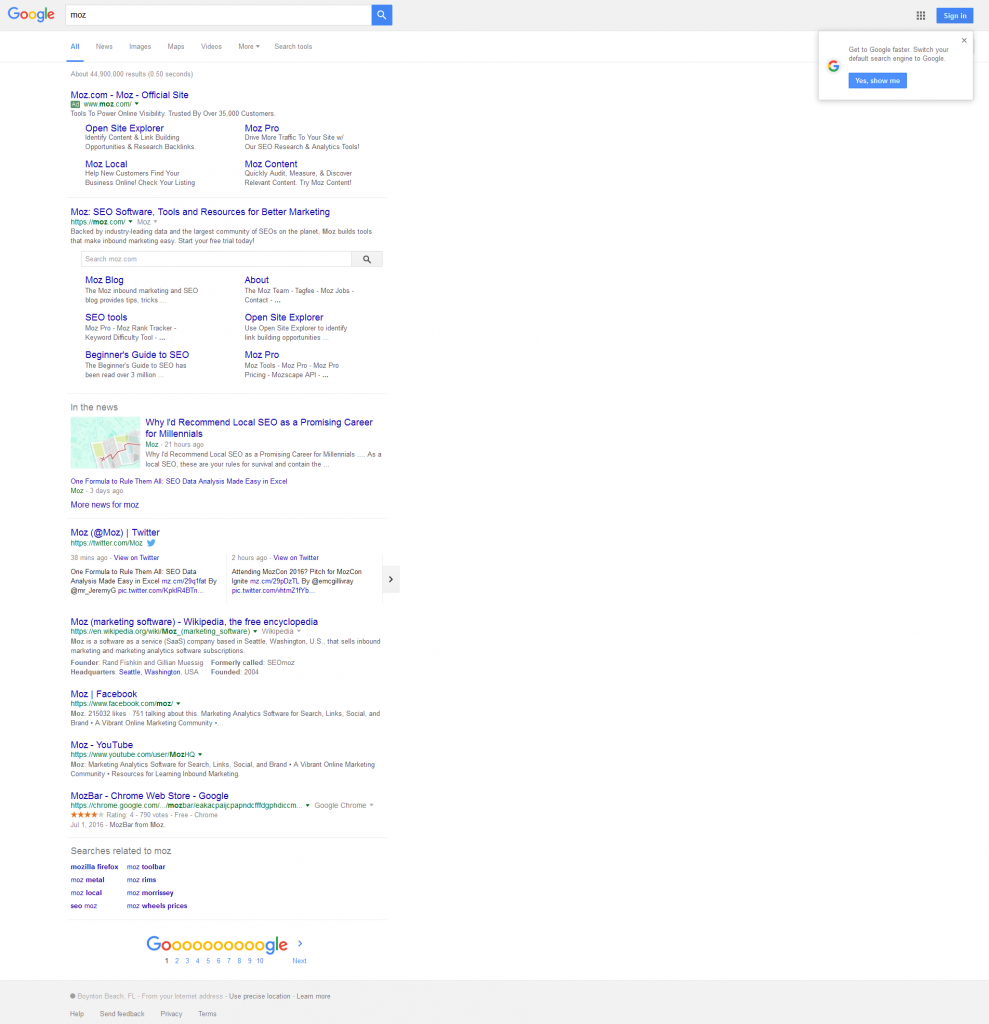 Google “in the news” disappears. 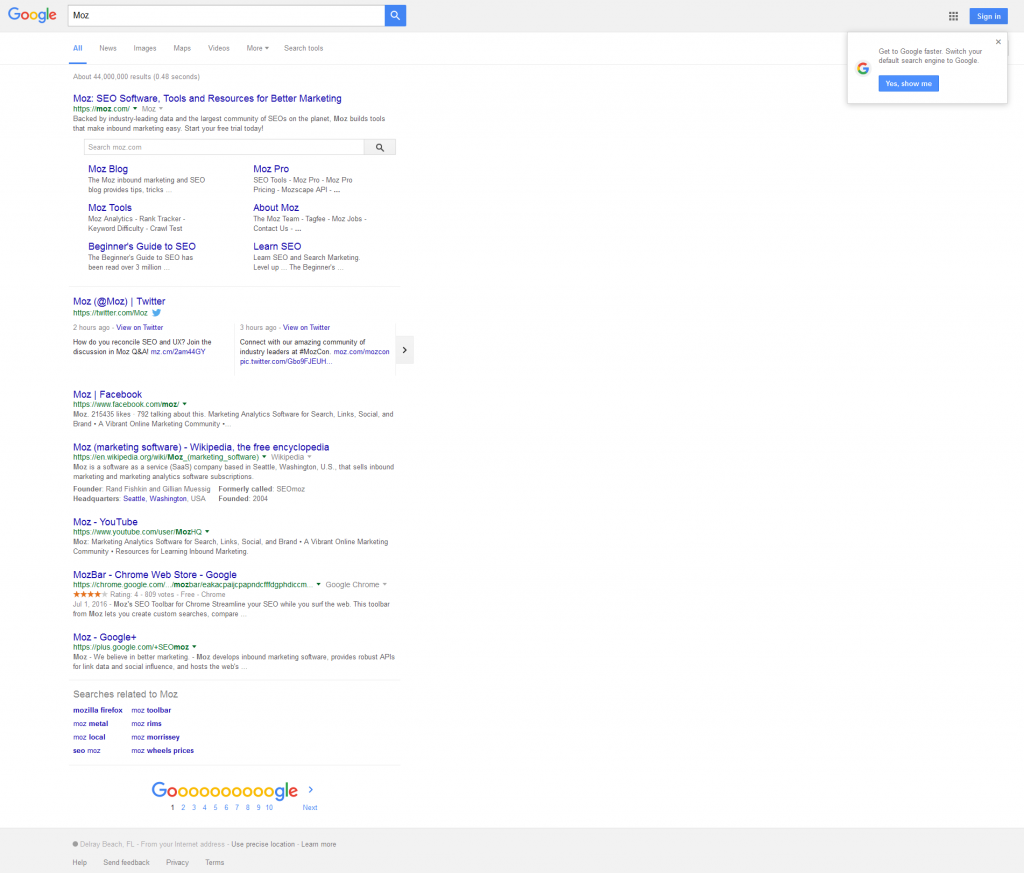 Let’s check in and see how Google “related searches” are doing:

Still a waaaaays to go! 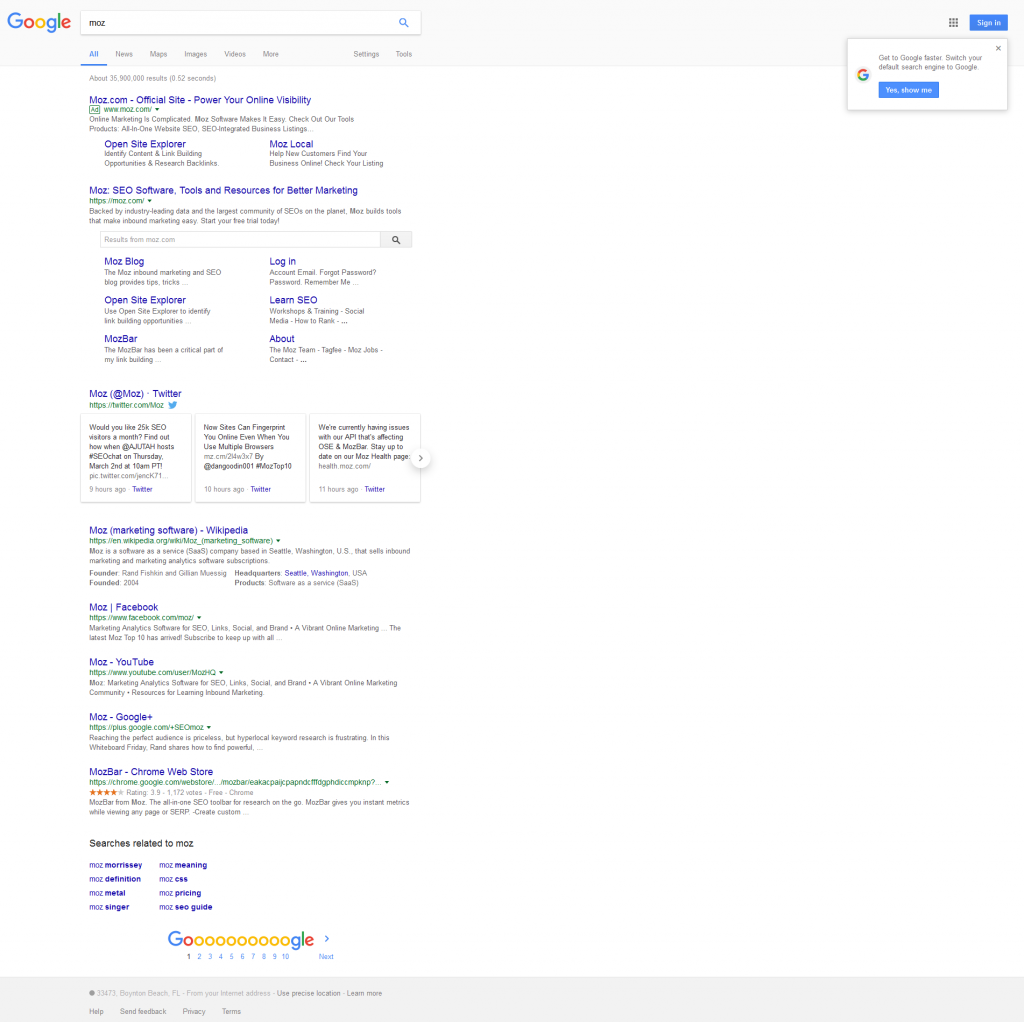 A huge day for Moz! 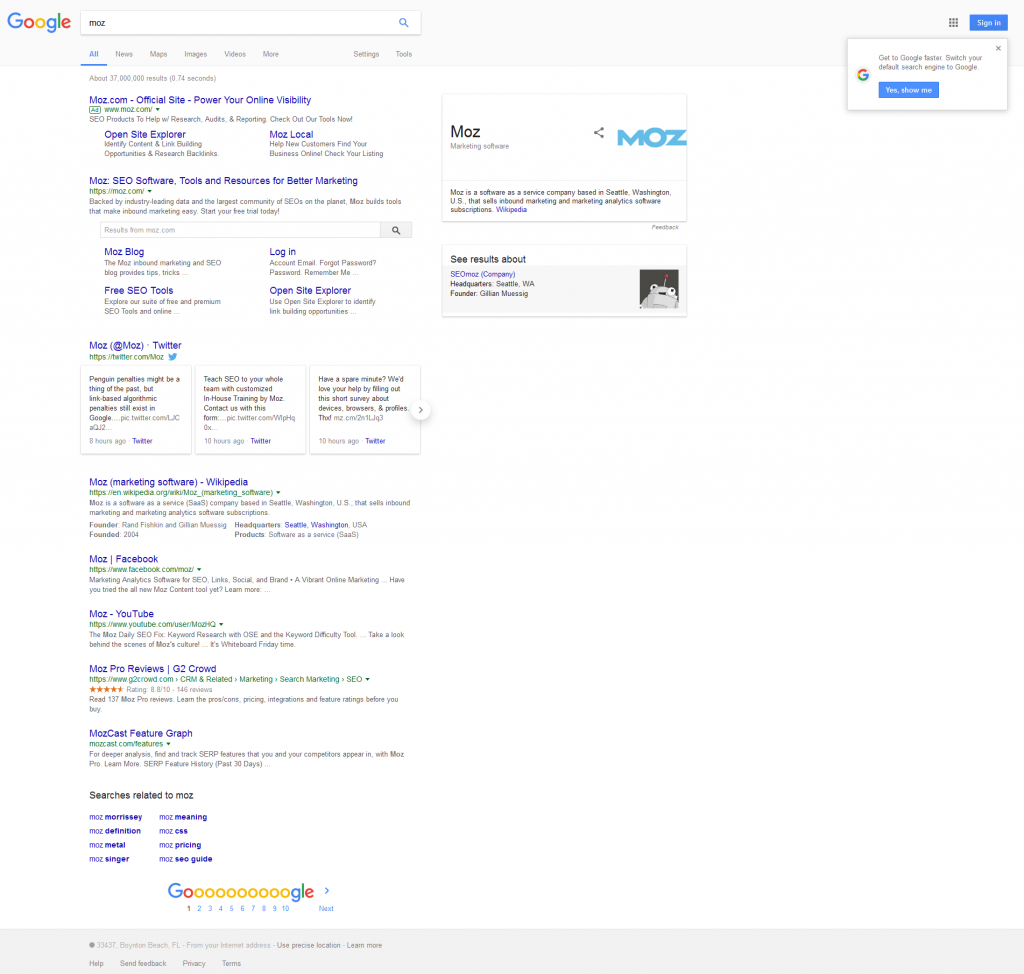 Google giveth, and Google taketh away thy knowledge panel.

A bunch of other changes:

“people also search for” cards on the bottom of the SERPs.

They ditch the exclamation point, and casually stuff some keywords in the description.

Google also ignoring the last sentence in their meta description:

A few other notes: 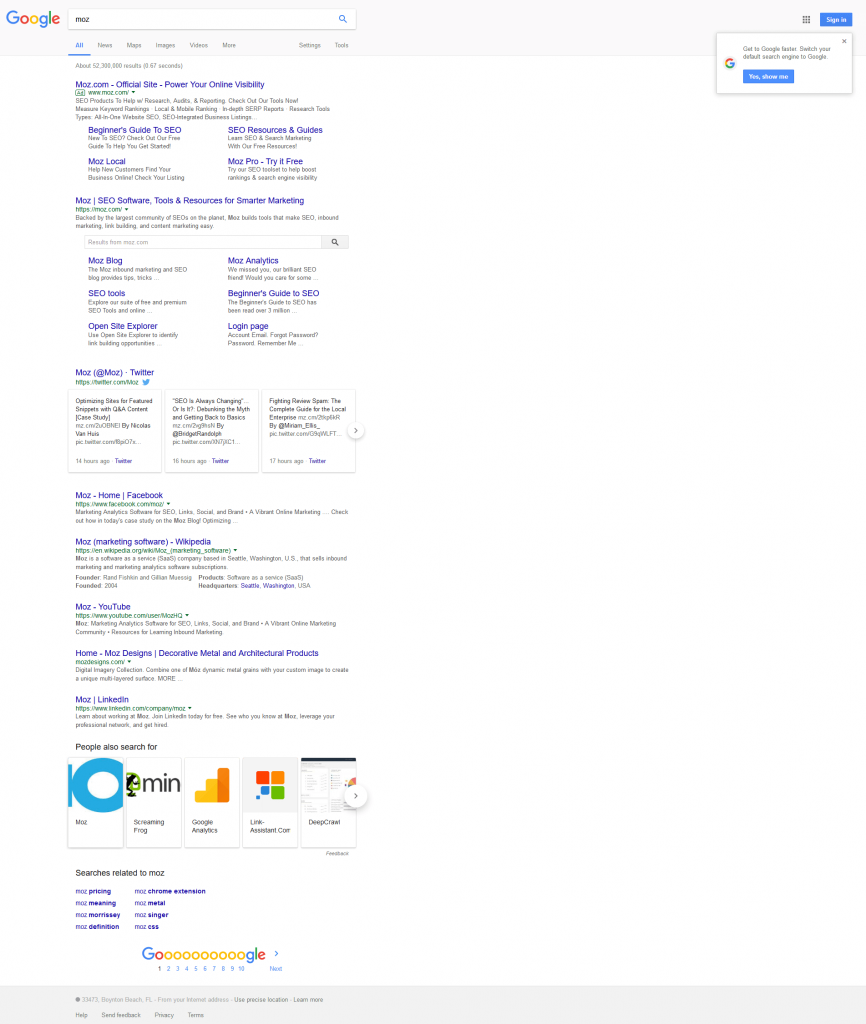 Literally a few minutes later, from the same PC, location, and browser Google delivers a brand new type of SERP for Moz. A “people also search for” carousel along with a knowledge panel. 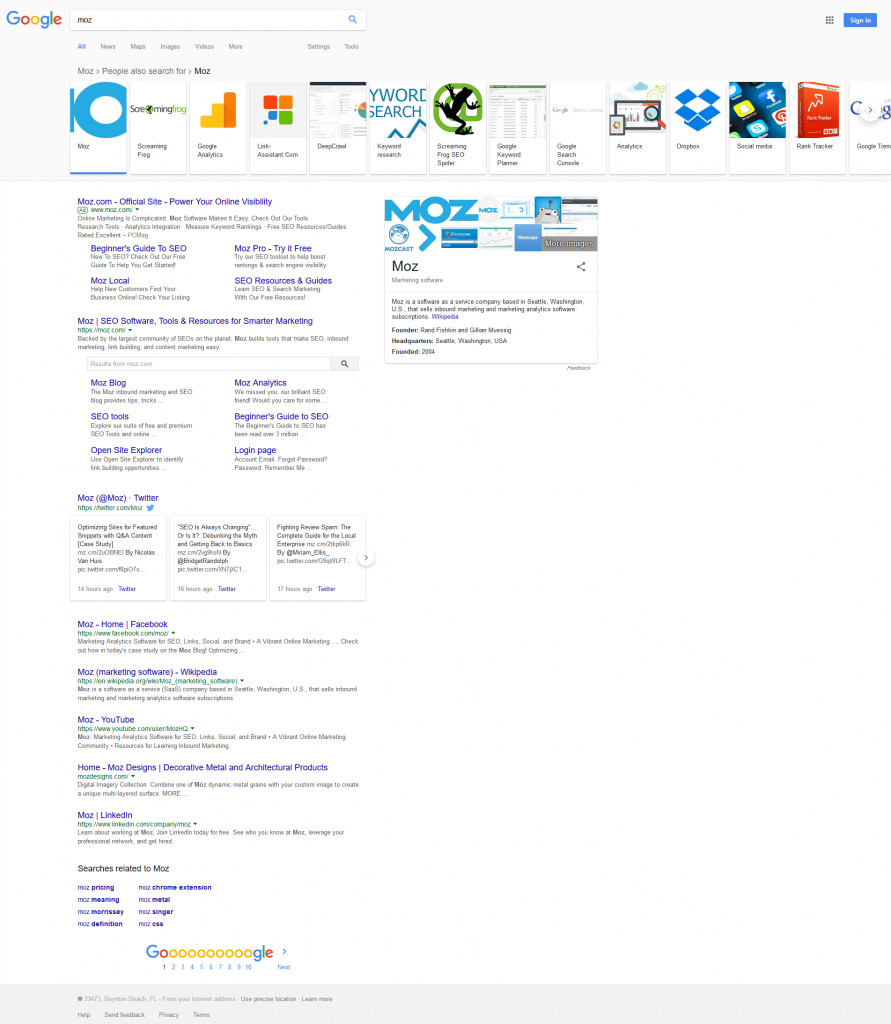 A few months pass by, almost a year with no news stories in the SERPs, at least for Moz. News is replaced with “top stories” and Moz is finally given a proper knowledge panel with a properly sized logo. This is a huge win for Moz, they’ve done everything “right” to be blessed by the Knowledge panel gods and have finally been given one.

Wikipedia expanded SERP snippets (founder, founded) seems to be visible depending on the SERPs 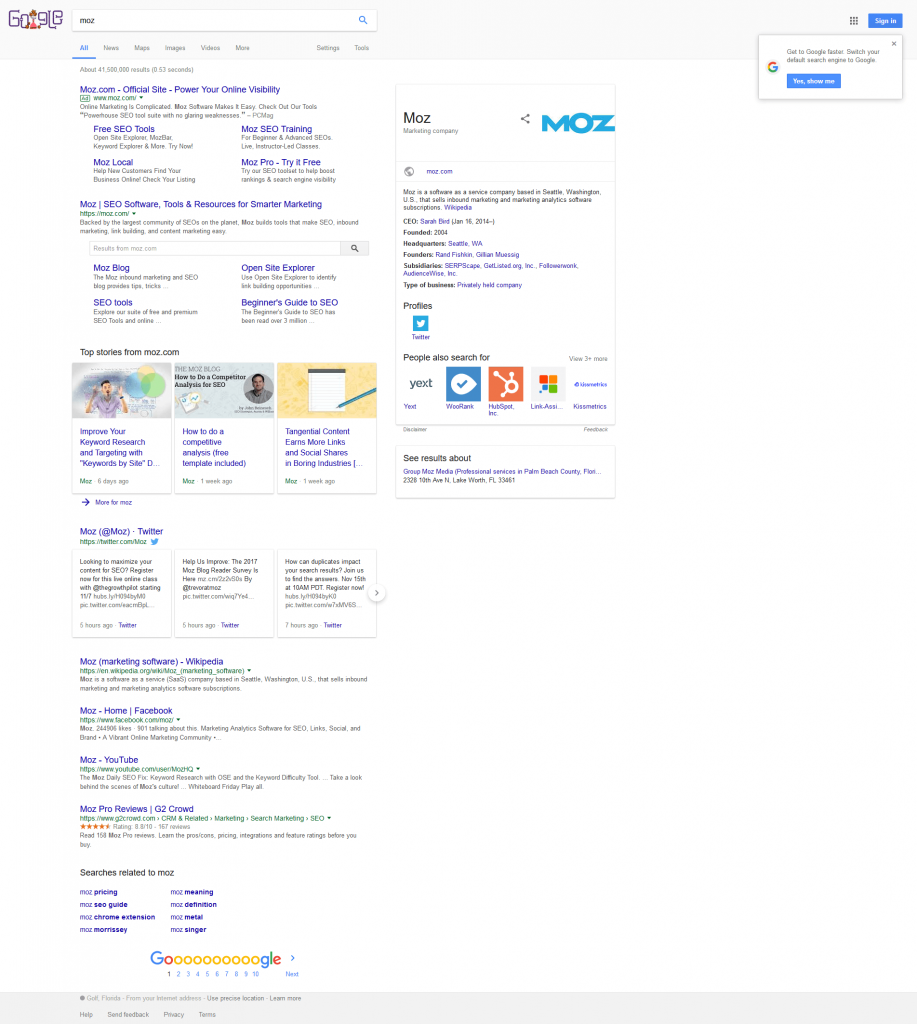 More time passes without much change. Google then decides to revert back to “SEOmoz” knowledge panel

Lots of other small changes:

A great day for Moz branding! their related searches finally seem to pop & are relevant:

It appears as though for Google’s Facebook SERP description went from using Facebook “about us” standard info to grabbing a random video (from 3 years ago) for their SERP description. And this isn’t Moz’s fault, they’ve posted many videos since then. How weird is that? 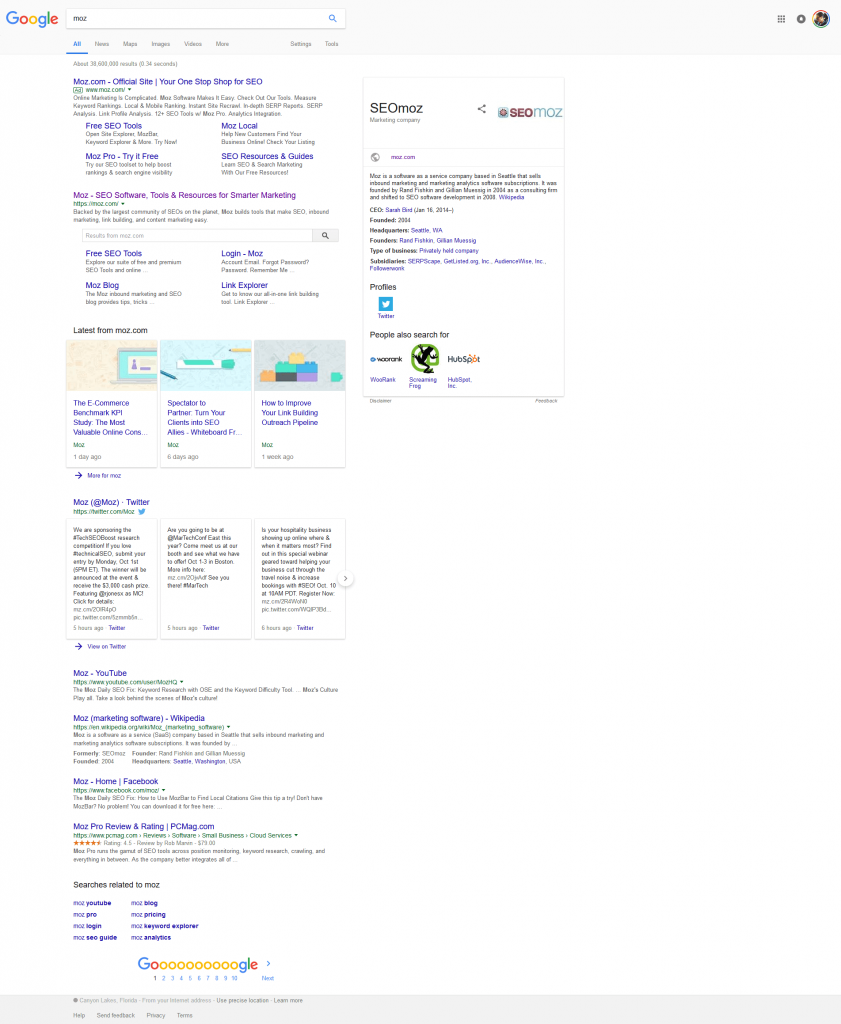 For some reason Googlebot decides to display Moz’s YouTube permalink from the “search engine friendly” /MozHQ to https://www.youtube.com/channel/UCs26XZBwrSZLiTEH8wcoVXw (emoji shrug)

For Facebook description for the past 30-60 days Google is still using some random video’s description. shrug 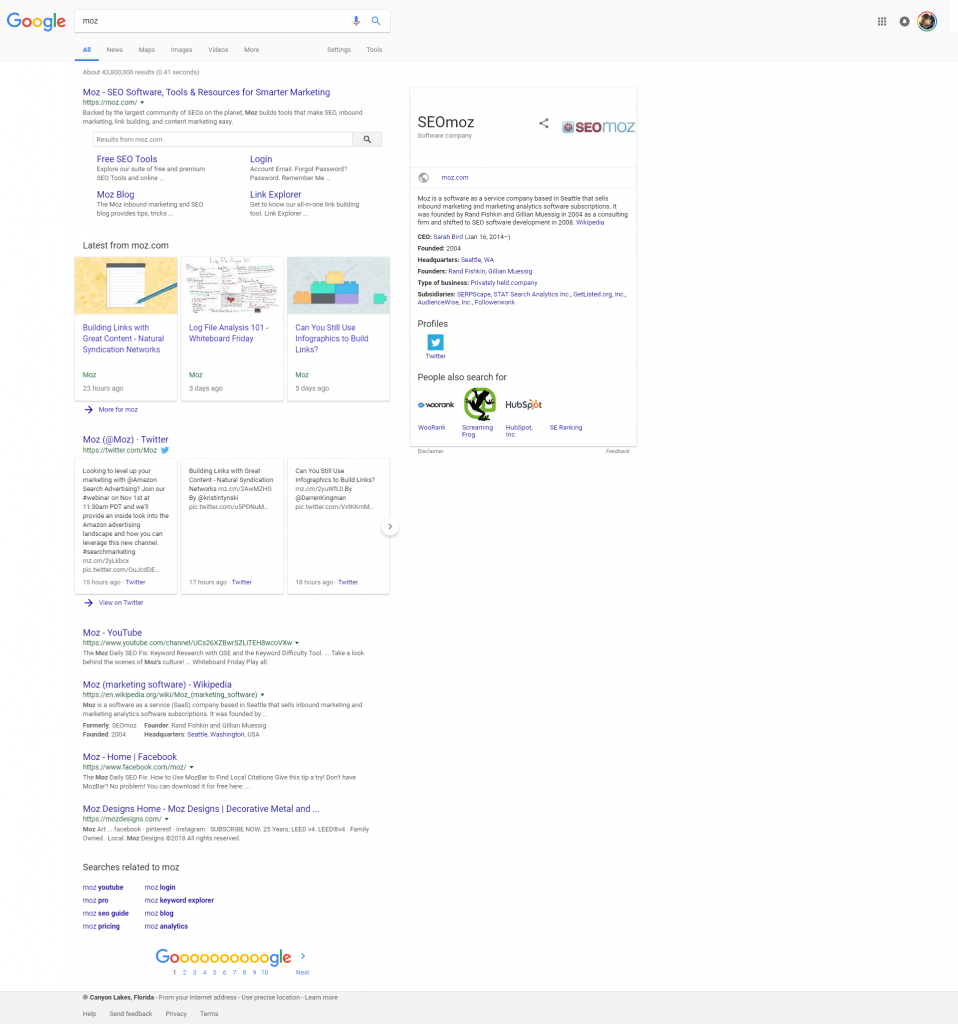 Knowledge panel still all jacked up, their image is way too big. We now see a “people also ask” panel which isn’t particularly helpful.

SE Ranking makes an appearance on “people also search for” w/o image.

Videos tab at bottom with YouTube carousel.  Interesting that the 3 videos I currently see are from 2013/2014. If you go to their YT page and sort by most popular, those videos aren’t even close. Another video from “IgniteVisibility” on how to improve domain authority shows prominent. 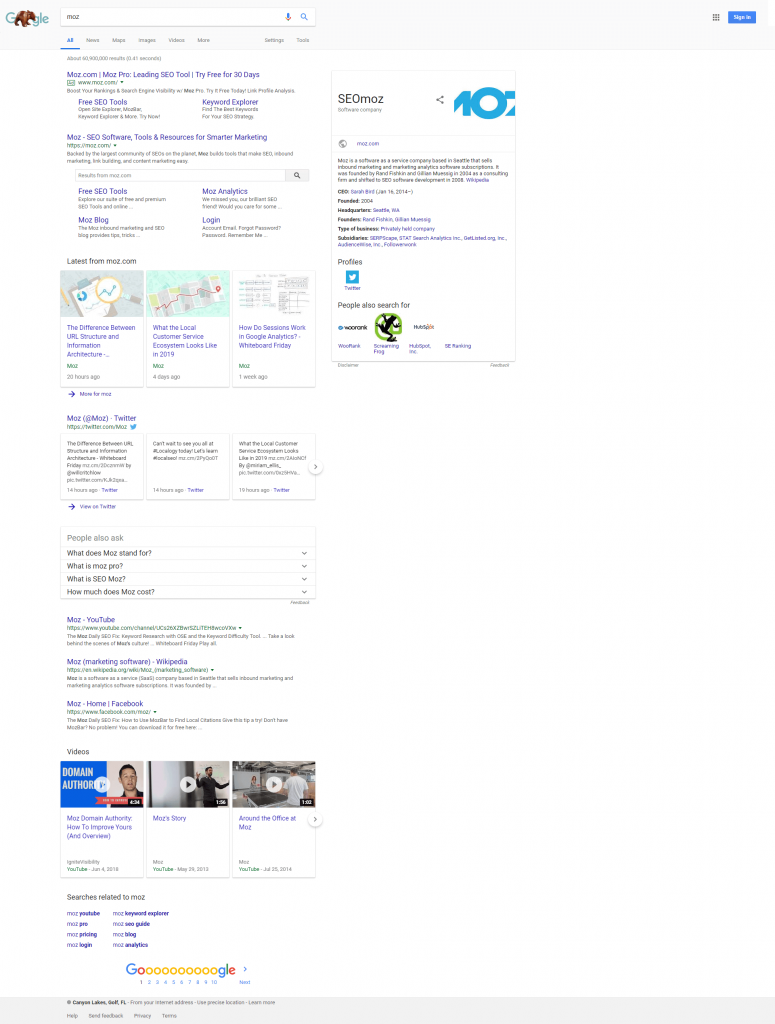 It almost seems like Moz got everything they’ve ever wanted from Google for the holiday’s. Their new CEO added to the KP, some nice subsidiaries, a great “latest from Moz” panel, and every single “related to moz” result is relevant.

They also got a really nice “people also ask” (this appeared a few weeks ago) and the links & content all seem to be favorable.

Since this is the last image I’d also like to note:

Throughout all the years Wikipedia remained 3rd or 4th from the bottom on all SERPs and Facebook and YouTube remained on page 1 for 99% of the last 4 years. 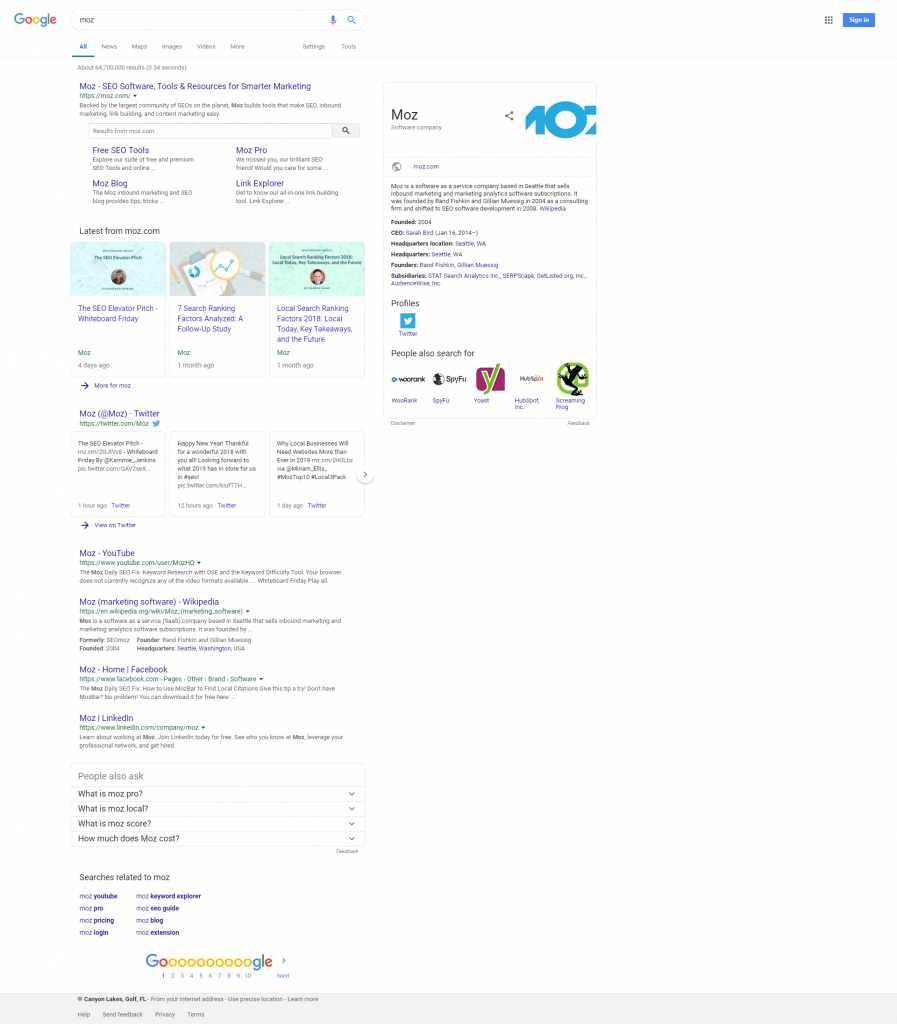 Well, that’s it! I’m not quite sure what I learned from this post, but it was a fun walk down memory lane! Happy New Year to all and have a great 2019!