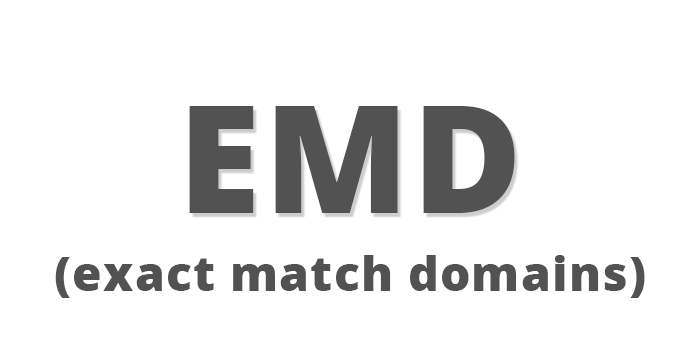 During the Fall of 2012, in a time when webmasters were already scrambling to deal with 3 consecutive Penguin updates, as well as Panda updates, Google released the EMD update filter. The EMD update otherwise known as “the exact match domain” update algorithmically targets websites that use an exact match domain to rank for keywords in Google. In short, this update essentially removes the authority normally associated with these domains and in some cases applied a penalty to them.

According to Google, the EMD update effected less than .6% of English searches, which is still quite a lot of websites. Moz did a study of about 1000 websites and recorded that 41 of those websites fell out of the top 10 and were “hit” by the update. Many webmasters from Webmaster World forum reported getting hit with this update as well.

Example of an EMD

Google did a great job of filtering out EMD’s but there are still many that remain, as of 2017 anyway. The best way to spot an EMD in the wild would be to search for a long tail keyword search as “bulk office supplies” and look at the results: 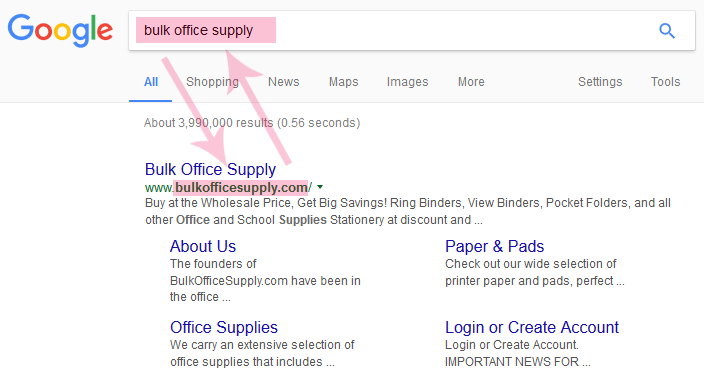 Another quick example would be if the keyword you wanted to target was “SEO blog” and you registered “SEOblog.com” and were ranking high for this keyword, Google might penalize this domain, particularly for that keyword.

Here you can see this domain is ranking for the keyword, most likely due to the fact that the keyword is present in the actual domain name. Prior to 2012, it was almost a sure thing that if you bought the EMD version of a keyword, you were going to rank for it. What many webmasters and affiliates were doing is buying up 100’s or 1000’s of these domains, putting small landing pages on them and directing traffic to affiliate products or hosting Google Adsense ads.

Even before the official EMD update, there were signs that Google was starting to penalize them, or at least devalue them. Since 2012, many things have changed within Google’s algorithm. There have been major updates, and several add-on actions they’ve applied over the years. Many savvy SEO’s even spotted the patent Google released about exact match domains. This may be the reason why some EMD’s are showing back up in the SERPs.

Sadly, there really isn’t a step by step guide to recover from the EMD update. You either have an EMD or you don’t. There are a few tips that can reduce the likelyhood of getting hit, or possibly recovering from it:

If you have gotten hit by the EMD update, chances are you are only penalized for the keyword that is contained in your domain. If that is the case, and your whole empire depends on that one keyword we recommend moving to a new domain.

While Google didn’t officially announce this on their blog like they have with many other algorithmic shifts, we did see a tweet from Matt Cutts right before it happened. This, of course spawned a huge chain of replies and chaos on internet forums.

Luckily, most webmasters don’t have to worry about this, even if you do have an EMD that doesn’t necessarily mean you are going to get hit by the EMD. There are tons of companies out there that named their company after

If you have an EMD and are worried about getting hit, you can always reach out to us for a free evaluation. Thanks for stopping by!