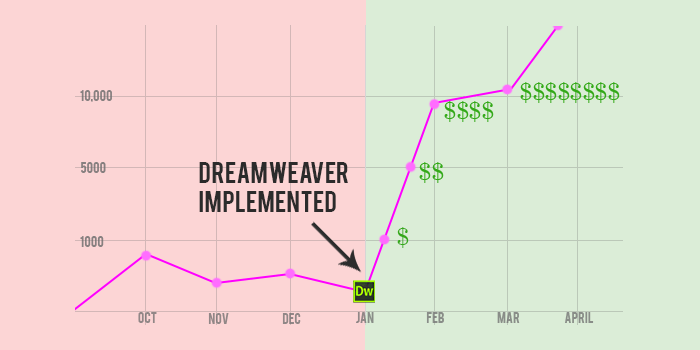 Note: this was an April fools joke 🙂

Within the past few months, we’ve discovered what we believe is one of the most shocking discoveries the SEO community has seen in the last decade. I know we’ll probably get a lot of flack for this post, but we had to publish it. We’ve been blogging about SEO for 9 years now, and only publish the truth based on fact, direct correlation, or undisputed evidence. The case today contains all three. Using Adobe Dreamweaver to develop your website is a direct ranking signal, and will enable your website to rank higher in the SERPs. Let us show you how.

For those of you who haven’t dismissed us by now, lets dive right in for an actual case study on how we used Dreamweaver to get higher rankings.

In February 2017 an online electronics store approached us looking for a fresh new look. We considered a few different options such as Open Cart, Magento, and Woo Commerce but d

ecided to go with a current favorite and underdog in the web dev community: Adobe Dreamweaver.

We began by importing the entire website into Dreamweaver. We then applied a popular Dreamweaver “theme” and applied a standard bootstrap CSS stylesheet. We went super heavy on the drop shadows, strokes, and glows as does any professional designer.

We then added one of our favorite open source solutions go commerce a headless eCommerce system, optimized our server, added a CDN, HTTPS, HTTP2, and SEO2.

After this, it was business as usual. We made sure to include all targeted keywords in the meta-keywords tag, and uploaded the site to the server. One of our favorite features of Dreamweaver is its mega-meta-dropdown list. We’ve even started the hashtag #DreamweaverForDays due to the popularity of Dreamweaver in our office.

Within 1 week, we noticed a shocking discovery: Our customer started receiving a shocking number of orders and website inquiries. We dissected our entire stack, and ran a GoogleSEO TM audit, and found nothing out of the ordinary. This can only lead us to believe that Adobe Dreamweaver is responsible for this shift in rankings. We’re not surprised either, Dreamweaver exports some mighty fine and clean HTML.

We also have a hunch that when Googlebot spots the meta tag, it gets a little boost in the rankings.

You can also help Googlebot find this clever hack by commenting your code:

I don’t care how many degrees in SEO you have, you can’t dispute hard evidence. Over the years, Google has been quoted saying they have preferences towards various frameworks. This is no different. Here we can even see one of GoogleBot’s custom Dreamweaver crawlers that we found lurking about our Apache logs.

We’re not sure why this is a ranking signal, we just know that it is. It could be because of a deal Google has with Adobe, but our theory is that this is more of an Easter Egg. So for now, we’re treating this as a secret we are sharing with our subscribers. It should also be known that this is an April fools joke, and I hope you appreciate our sick sense of humor.