If you’ve been paying attention to what has been going on the last few days in the industry, you are familiar with lyric website RapGenius being outed for their shady behavior on Hacker News and other websites.

On Monday, we outlined the drama that unfolded with RapGenius on Twitter and on other sites. In that post, we predicted that RapGenius would receive a manual action from Google for their shady link schemes.

Unfortunately, this appears to be true when this morning I woke up and discovered the sample keyword data that I was tracking (I normally never use a rank tracker) dropped 4-6 pages! I’m fairly confident from looking at this that the type of penalty applied here is the -50 penalty. There are a number of different types of Google penalties that can be applied as a result of a manual action, including moving the page back in the index or even removing it from the index completely.

Lyric website RapGenius dropped 4-6 pages in the rankings after being outted for shady link schemes.

It also appears that their fan base is already starting to complain about not being able to find them on Google.

In a last ditch effort, RapGenius attempted to write an open letter to Google, explain their actions, and place a ton of blame on their competitors. Despite of this, the long arm of Google justice came down swiftly on them on Christmas morning.

Earlier this week, Matt Cutts stated that they do try to avoid doing major algorithm updates during the Holidays, but I suppose major PR disasters like this are an exception especially when clearly manual action needs to be taken.

According to Quantcast, over 50% of the traffic to RapGenius comes from google.com and other country level Google domains.

The growth has been tremendous over the past few years for RapGenius, and they typically see well over 10 million visitors per month to their site.

It will be very interesting to see if these overall numbers do in fact drop over the next few days/weeks and if RapGenius scrambles to find a new traffic source to fill the gap. RapGenius will surely get a good amount of traffic and brand notoriety just from this story alone. 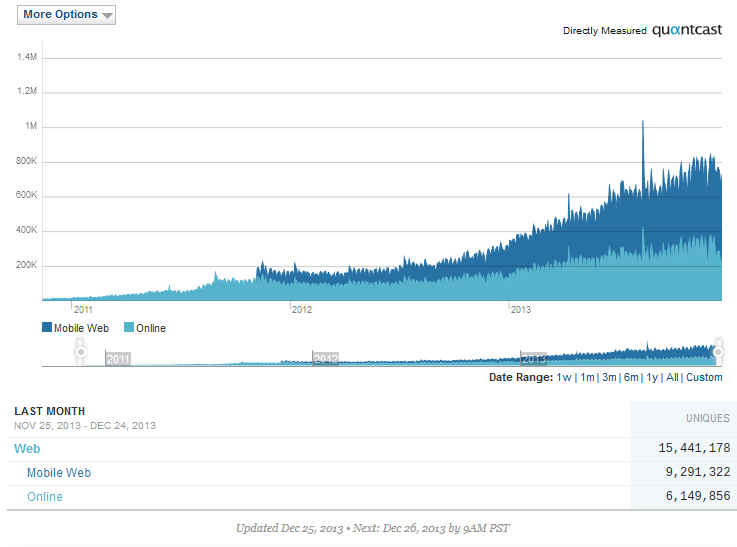 A snapshot of RapGenius.com’s traffic over the past few years.

A December snapshot of RapGenius.com’s traffic.

The fear of God has been put into RapGenius and now they must clean up their side of the street. Link removals and reconsideration requests are in RapGenius’s future if they want to dig themselves out of this hole.

The great part is: this should make for a great example as well as a case study if they do manage to get this penalty lifted.

Google generally responds to larger brands a little bit quicker than the smaller ones when it comes to reconsideration requests, but claims they do not play favorites.

We wanted to wait at least 48 hours before we made any assumptions about their traffic.

It is now safe to say that over the past 2 days they have taken a -82.3% decrease in overall unique visitors as a result of this penalty.

This not only shows what a massive hit they took, but more interestingly how dependent they were on Google’s traffic overall. Other sites have guessed that they received only 30-50% of their traffic from Google, but these latest numbers tell a much different story. 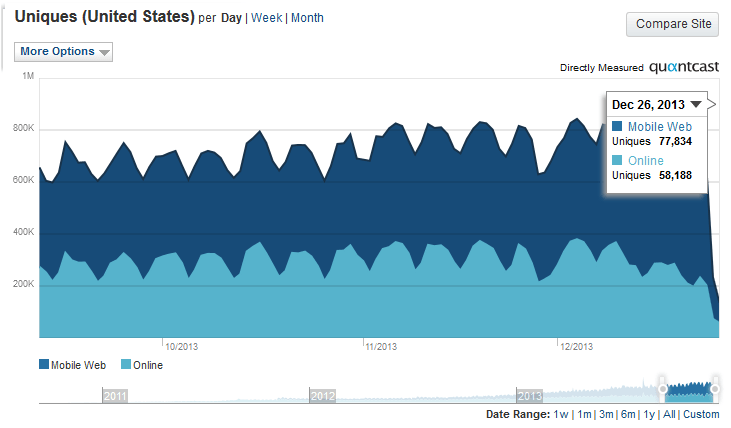 Before the penalty, RG would receive 400k+ UV’s per day. Over the last few days it has been below 80k, approximately an -82% decrease.