Myth: High OBL’s are Bad for SEO and PageRank

Home » Myth: High OBL’s are Bad for SEO and PageRank

Myth: High OBL’s are Bad for SEO and PageRank

This whole state of mind started a long time ago with SEO’s who had an unfavorable experience with doing SEO after posting blog comment and forum profile links on sites with 100’s or 1000’s  (or more) of outbound links.  This caused a fear amongst SEO’s of adding outbound links to their websites.  It even became a metric in some SEO tools which check for OBL’s almost as if it was a ranking factor.

There are some cases where it might be bad, such as blogs that allow open comments that have collected 1000’s of comments.

OBL’s and UX in SEO

Let’s think of some of the sites that we view as “high quality:” 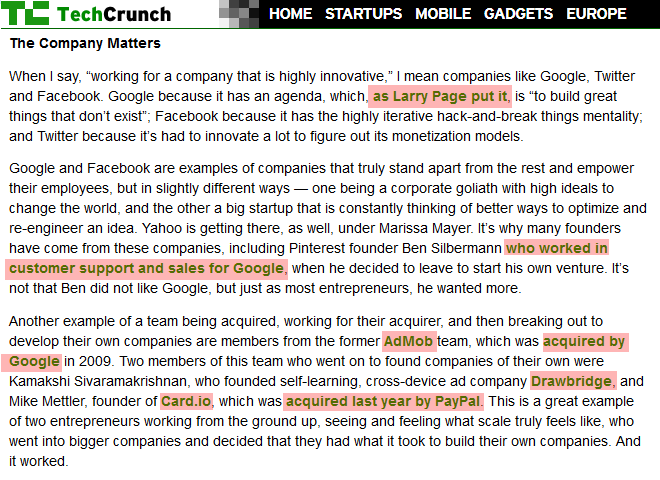 8+ OBL’s in just a few paragraphs of this TechCrunch article. Think they are worried?

If you take a quick glimpse at any random post on any one of these sites, you will most likely see as many as a dozen or more outbound links per page or post.

In most cases, outbound links are put into place by the posts author to show authority, and to show that what they are writing is backed by a reputable source.  Anyone can reference a quote or a story told by someone, but only is it viewed as credible when that data is backed up with a link from a reputable source.

Relevant links to other sites will help reinforce what your sites content is all about.

Imagine a web where we could be penalized for linking to other sites, it would be chaos!

Why on Earth would Google ever penalize your site for wanting to cite another website as a reference?

They wouldn’t, and they don’t.

But why did sites like Wikipedia Nofollow Their OBL’s?

The short answer is: because people were spamming them.  Wikipedia knew that if they added the no-follow attribute to their out bound links that less people would spam them.  They also hoped to attract more genuine users that wanted to add value instead of “post content and get a link.”   Squidoo was another company that chose to no-follow all of their outbound links for SEO purposes. Here is what Squidoo had to say:

“One signal that search engines used to rank pages is the quantity and quality of inbound links. This makes Squidoo–an authoritative domain with a platform that allows anyone to share their passions–a big target for people who spend time stuffing irrelevant or useless links into pages as a way of deceiving the search engines. Based on the successful implementations of other authoritative sites, like Wikipedia, Squidoo will now apply “nofollow” markup to all outbound links. This means that any link shared on a lens will work exactly as it always has for you and for people visiting Squidoo, but search engines will no longer use it as a signal for ranking.”

This was a targeted move by their team that they knew would reduce the amount of SPAM on their website and increase quality at the same time which in turn will help their overall SEO game.

Won’t my PageRank “Escape” by linking out?

This is another myth and I am not sure what the origin of this is.  If you are unsure about exactly how PageRank works (it’s not easy to grasp) then do yourself a favor and check out this blog post by Matt Cutt’s that talks all about PageRank sculpting. If you are an SEO historian like I am, you can take a look at this paper about PageRank written in 1999 by some very familiar authors.

The only links that can cause an impact on your PageRank are inbound links (links pointing to your site.)

“I would recommend the first-order things to pay attention to are:

1) making great content that will attract links in the first place, and

2) choosing a site architecture that makes your site usable/crawlable for humans and search engines alike.”

Earlier in his post he mentioned that “No PageRank would ever escape from the loop” while he referenced a model, and to basically build good content which will attract good links.

On the Contrary: SEO and OBL’s

These days it is quite common to read an on-page SEO guide and see recommendations to link out to authority sites. While there is no exact evidence on linking out to authoritative websites will help you rank better, it does make sense that it might be a positive signal to Google. There are 2 tools that we really like for checking outbound links on a website. One of them is Screaming Frog, the other one is Xenu.  This way they will not only give you a rundown of all OBL’s on your website, but it will tell you if you have any broken links as well.

While it might be up in the air if outbound links help your SEO game or not, we do know that having broken links on your website might not be a positive user or bot signal on your website. We recommend doing a sitewide scan at least 3-4 times per year to make sure you don’t have a lot of broken outbound links. It is one thing to have 1-2 broken OBL’s but once they start stacking up it isn’t the best signal to send.

Google’s algorithm continues to evolve as their engineers advance in their own understanding of it, and it is molded based on trends (good or bad) that are happening on the web.

“If you believe that Google stopped innovating in link analysis, that’s a flawed assumption. Although we still refer to it as PageRank, Google’s ability to compute reputation based on links has advanced considerably over the years.“  -Matt Cutts

Google’s algorithm knows what a directory site is when it is crawled and may devalue that site as well as the outbound links placed on it.  In the past few years Google has really started devaluing these links, and even penalizing these sites for participating in “link schemes.”

All directories aren’t bad.  One of the most famous directories, DMOZ has gained a lot of attention not just for its affiliations but because it is known for being very strict with which sites it accepts into its directory.  This is exactly the type of behavior that Google wants to see from a website.  There is a huge difference between a directory that auto-posts all links (or does it for a fee) and a directory that moderates submissions based on quality and relevance.

There are dozen’s of frameworks that have been spammed to death over the years: WordPress, Pligg, MediaWiki, vbulletin, etc.  That is not to say that these frameworks are inherently bad, or are even treated differently.  Some of these websites with these frameworks on them that leave themselves open for anyone to post will no doubt self-identify as a bad neighborhood and likely cause a negative impact on themselves and the sites they link out to.

Linking out to reputable sites will never hurt your site.

Linking out to 1000’s of sites or creating a website based on linking out could hurt your site.

There is a very clear line between the two, and Google’s advanced search algorithm is very capable of telling the difference.

If you want to build a website that is viewed as quality by your users, linking out should be part of your site.