9,538 Views From a Stupid Post, A Tale of Virality

9,538 Views From a Stupid Post, A Tale of Virality

It wasn’t until I found SEO that I found out that I love to write. I’m really an amateur compared to my brother who loves to write and is a reporter for patch.com. So I guess it is in my blood.

I’m more of a technical writer.  I love to write about trends, methods, and techniques – but I always throw some opinion in there.  I find blogging to be very fulfilling and a measurable task.

A few months ago I decided to write a post titled, “8 Most Overused SEO Images.”  I wrote it on a whim just to lighten up the blogs mood and to do something fun.  We all see the same images being used on SEO websites all over the place, so I thought I’d make a post that highlighted the ones that were the most overused.

Anyway, the post was never meant to be a big deal.  I figured the usual 20-60 people would stop by maybe more, maybe less.

So I made the post and retired for the evening.  I opened my analytics the next morning and was astounded!  What had happened?  Was this a DDoS attack??  I had over 3,000 unique visits in the last 8 hours. 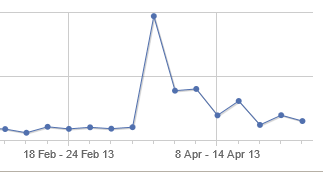 I didn’t need coffee the morning I saw THIS 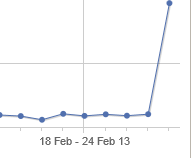 So I looked deeper into my analytics and saw that it was from the post I did.  How could this be?  I’ve written much more interesting content then this, and never, ever saw anything like this!

A combination of factors made this post go viral, and it had nothing to do with SEO.  It was all social.

I noted that there were hundreds of referrers coming in from plus.google.com and the like.  A few people +1’d it and re-shared it, and then it snowballed from there.

How it exactly happened

The first part was a bit of luck. Cyrus Shepard, an SEO wizard from Moz shared it which I attribute about 40% of this traffic and success to.  A classic example of social proof.  Get a well-respected person like Cyrus to share your post and good things will happen. 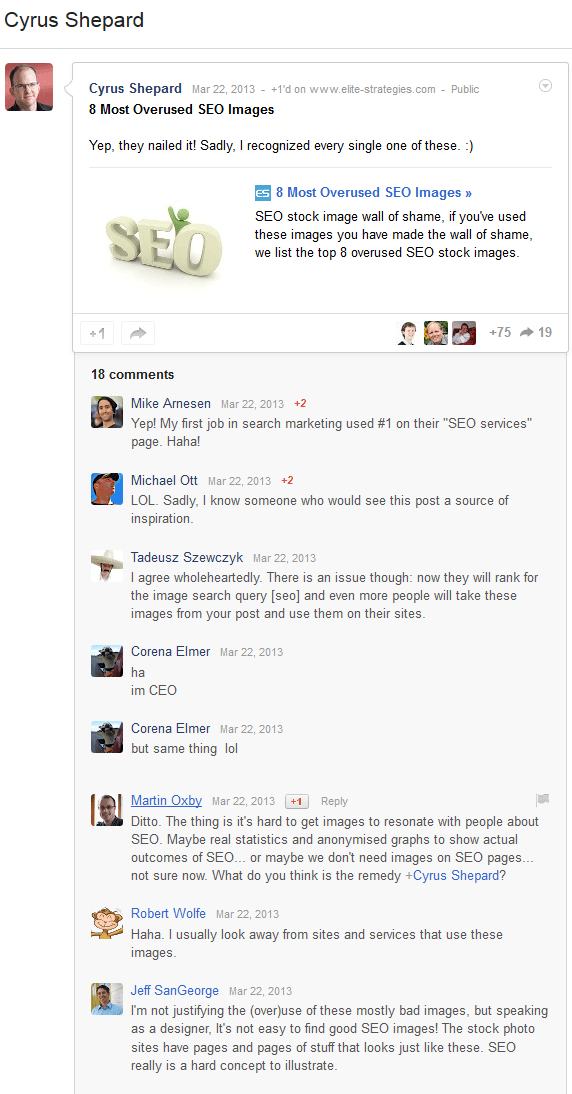 It really didn’t stop there.  By noon the next day it was getting retweeted like crazy on Twitter.

Nothing major happened on Facebook which isn’t really surprising. It was indexed in Google within about 3 hours which was cool to see.

Later that afternoon it got shared on 2 forums (1 of which I wasn’t thrilled about) and a bunch of other random/micro sites.

By the end of the day we had received 5,000 unique visitors to that 1 post, which was far more than I’ve ever received from anywhere.

It continued the next day.  It continued to be shared, retweeted, +1’d and liked all over the place.  I have to admit I gave it some extra momentum by sharing it again on a few different places, but that was really nothing compared to the initial pop.

The next few days, the post started receiving less and less visitors, which was totally expected.

Side effects of this random viral-ness

We got some great interactions.  On our blog, a good post will normally bring in 2-3 comments over a week.  This post had 20+ comments right away!  Awesome.

Someone even totally ripped me off!

That’s right.  Some “seo blog” straight up copied my post and kept it for their own.  That post even got shared a ton of times and got some comments. I emailed the webmaster an intent letter to cease and desist and he took it down promptly. It happens.

From that point on, traffic on our blog/site increased 200% every.single.day.  Yup. Not sure if it was a combination of the links that we got or the viral signal it was sending to Google, but organic search traffic went way up, and several blog posts from there on out got some really nice attention. 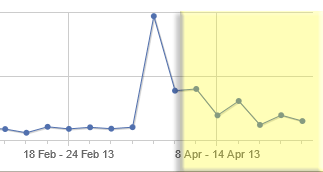 I’ve been blogging for over 3 years now about SEO.  Running an SEO blog is very rewarding.  I don’t do it for the traffic, for the money, for the leads, or anything else.  I don’t try to capture email addresses or sell any services.  I do realize Google will love this site more as a result, but that is not the primary purpose.

I genuinely want to provide a service to the members of the SEO community and post good content.  Seeing a post like that take off makes me very happy, and all the hard work pay off.

Thanks for anyone who stopped by, have a great day!