Google’s latest hack into their search infrastructure is actually an “Easter egg” – for those of you who do not know what an easter egg is, it is a tiny piece of programming built into a program, or operating system that will do a little trick, display a message, or something that the programmer who developed the program thought was cool.  Sometimes it is intra-company political, if that even makes sense, other times it is just a funny little thing.

Type in “zerg rush” into google.com and see what happens.

““For nOObs who aren’t as familiar with real-time strategy games, there’s been a zerg rush on your search results page. Because there should always be time to practice your gaming skills, click on the zerg units to defend the results page and try not to get pwned. Then you can share your APM score on Google+. GLHF!”

If you try to click on the falling “O’s” you just can’t win (kind of like the latest SERP update)  :/

There are a few other Google easter eggs such as: (just type these into Google Search)

“do a barrel roll”

So what is Zerg Rush anyway.  Follow that link to find out, but it is basically a huge attack launced from one group of players against another.  Pretty nerdy but cool.

Another user from Hackernews stated “This easter egg is referring to the game StarCraft 2 by Blizzard. There are three fractions in StarCraft 2: Protoss, Terran and Zerg. Imagine the Zerg like aliens. Zergs have a unit called “the Zergling” which is a small creature that usually attacks buildings and enemy units in groups. If you have a lot of Zerglings and run to your opponents fast this can be called “a Zergling rush”. There are also custom maps that you can play that are called Zerg Rush: You are in the middle of the map and Zerlings are streaming to your bade from all sides. You have to defend it like in the easter egg.”

Mashable covered the Zerg Rush hack as well as other major news outlets.

What I want to know is what the hell is Google doing right now?  The SERPS are completely mad right now and totally in disarray.  Fortune 500 company’s are losing thousands by the minutes, webmasters who follow their guidelines are being penalized, and the rest of us are scrambling for a solution.  I guess they feel like releasing an easter egg is good PR for themselves (no I don’t mean pagerank)

Hope you all enjoyed this little trickery – really this is an attempt to see if I can rank for the term Zerg Rush as a little post-update to see if we can rank without using backlinks, but also felt that a lot of our users might enjoy this update.

Speaking of which, elite-strategies.com did great in the update, and is actually ranking on page 1 of Google for “April 24 Google Update” and a few other related and long tail terms, pretty cool huh?  We got some really nice traffic over 300 visitors per day over the last 72 hours alone, (wish I would have put some more time into it)

Below is a little screenshot of the easter egg in live action: 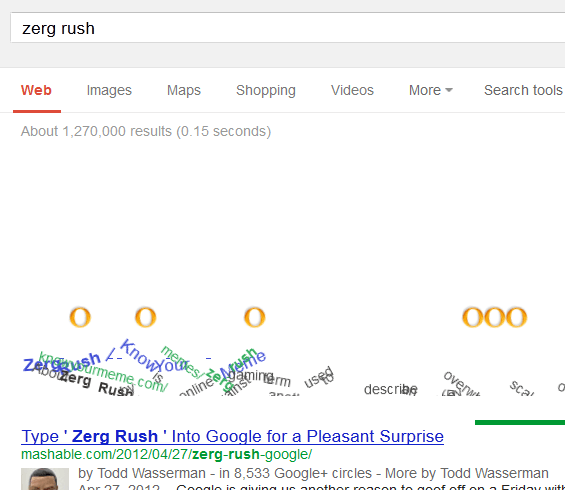