One of our most popular blog posts to date is our 3 part Tumblr SEO series that we started in 2014. We’ve had thousands of visitors to that page, dozens of emails and hundreds of social interactions as a result of that series. But a few things have changed in the last year or so and we’d like to cover them.

The question is as follows:

I’ve been reading that Tumblr links are “do follow” and can offer a lot of SEO value. I am a little confused though. If the original blog domain was blog.tumblr.com, but you purchase a custom domain making it blog.mywebsite.com, will any links reblogged through Tumblr affect my actual website or just the Tumblr?

There is one exception to that rule. Tumblr does control some of the linking that happens within the framework. For instance anytime you reblog something at the bottom of the post it lists who reblogged it. Those links by default are all no-follow (more on that later.) 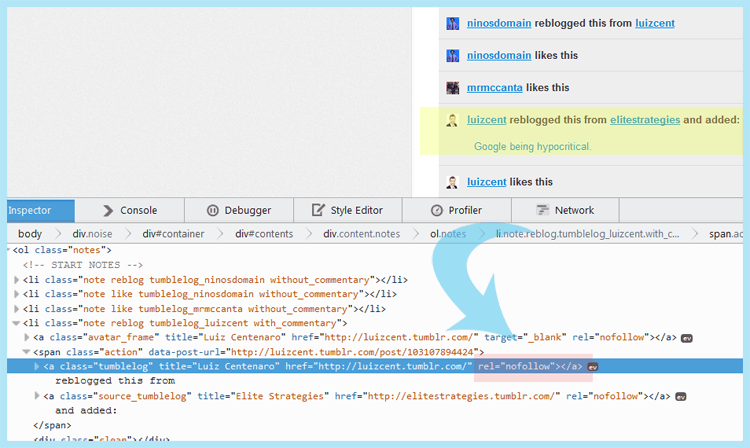 What exactly is Tumblr reblogging from an SEO standpoint?

By reblogging a Tumblr post, you are essentially re-sharing that post on your own Tumblr site. The only difference between a regular post and one that is reblogged is the one that is reblogged cites a reference in the form of a link back to the original account, the date, and any hashtags that went along with it.

Reblogging can be a very powerful tool on Tumblr. We have one post on Tumblr from our Tumblr SEO series that has been reblogged, linked to, and liked hundreds of times. As a result of this it brings us tons of traffic and the Tumblr post itself is ranked on the first page for a number of search terms.

To answer the question: will any links reblogged through Tumblr affect my actual website or just the Tumblr.

In my opinion, yes. This used to be extremely easy to game. Back in the day, you could use blackhat methods to get reblogs for your Tumblr posts. Each time you got a reblog it would create a do-follow link from the profile and drive link juice back to the post. With little effort, you could get these bad boys ranking for solid keywords on their own.

Rebloggging can still have an impact on SEO as a side-effect. Tumblr has its own internal algorithm and getting lots of reblogs can get your Tumblr post ranked higher within Tumblr’s own search results.

Tumblr Backlinks, from a Googlebot perspective

In my opinion, these 3 scenarios would be treated extremely different. The question “do Tumblr links matter” is not black and white. As with any website or page on the web, all websites have their own page authority and domain authority. Take a look at these 2 Tumblr blogs, my personal one that I rarely use, and our company Tumblr that gets a lot of attention. 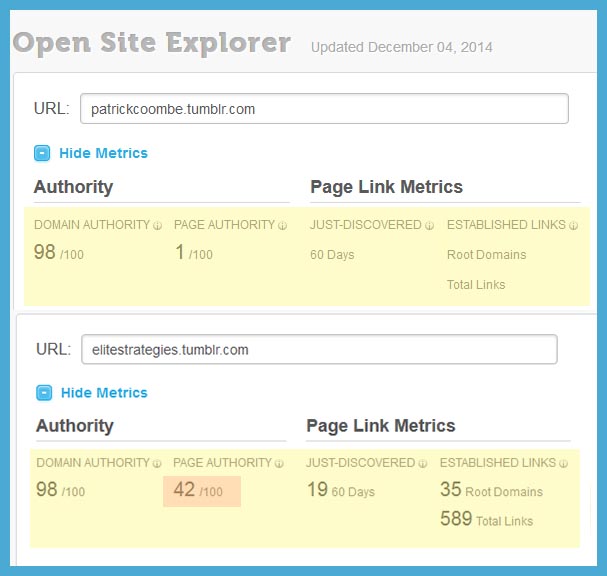 All Tumblr’s have the same domain authority, but need to earn their own page authority.

White Men Wearing Google Glass, a very popular Tumblr got so much attention within just a few weeks that its PA shot up to a 70 at one point, it is currently a 62.

In essence, there is no cheating anymore. You can game the system for a little while, but eventually you’ll get hammered into submission by the great gods of Google.

This is a very tricky topic. Webmasters can change their URL from whatever.Tumblr.com to example.com (or whatever.example.com) for a variety of reasons.

A custom Tumblr domain will retain and possess its own domain authority and page authority, unlike normal Tumblr’s that reside on the tumblr.com domain.

If a visits the Tumblr URL they will be automatically redirected to their custom domain.

Webmasters and business owners can choose to have a custom Tumblr domain for a number of different reasons. Sometimes a Tumblr starts out as a fun little blog, and turns into a major project.

I hope some of this answered your questions, let me know if you have any more!