There is something very liberating about sending a huge task out into cyberspace to someone you know and trust, knowing it will be completed while you sleep.

As a business owner and internet marketer, the best advice I ever took was to build relationships with talented people, and establish a scalable process to allow me to step back and concentrate on the big picture. I have been self-employed for almost 5 years now, and I attribute that success to the people I’ve surrounded myself with (and cut myself off from) and the processes I’ve put in place. And just to be clear, our core team is in-house here in Delray Beach, Fl but we do rely on remote workers for some of our more obscure tasks.

Since I don’t have an MBA or lots of college behind me, most of what I’ve learned has been self-taught or through trial and error. Sometimes it seems like it is way more error than trial.

Today we’ll be looking at the people & the processes that helped grow our company. But instead of talking about the core employees that show up for work everyday, I’d like to focus on our remote team of experts, and how I managed to find willing & able talent at the ready. So I won’t be talking about:

Instead of all that, I’ll be talking about the how and why of establishing a team of capable problem solvers to assist you in your journey of building a scalable business.

It doesn’t matter what the task or what time of day or night, I always have someone ready and excited to help me with whatever I need. 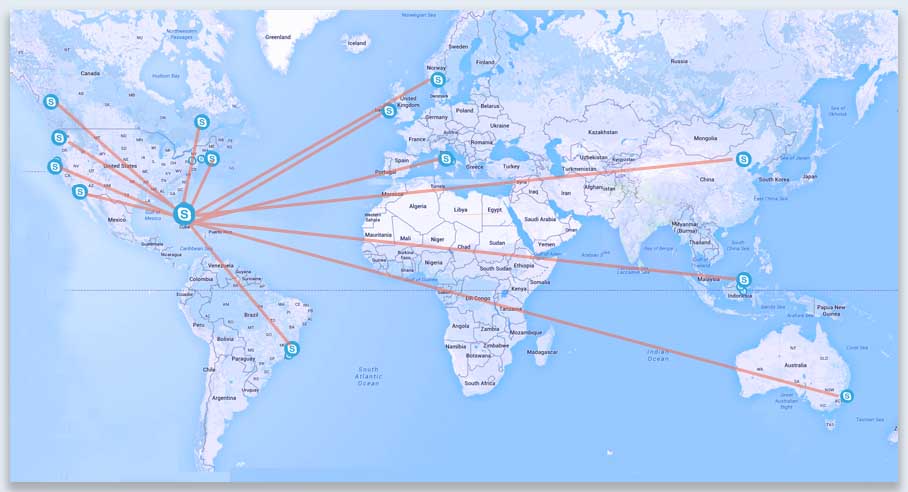 What our army consists of

I’ve been on the web since 1998. I was extremely active on BBS’s, newsgroups, IRC, and the early social networks. Over the years I’ve made a ton of folks from all different walks of life that make up my army of capable problem solvers.  This army includes, but is not limited to:

Keep in mind that some of these relationships are give and take, meaning I will assist them with problems or favors. Other relationships are purely “for hire” and I will task them out with small jobs on the fly.

The great part about finding a talented worker online, is they are already skilled and ready for work. There are however internal systems such as CRM’s and project management solutions that you might need to train people on. This does not happen by default or automatically. Most of the time I will wait weeks or months while working on a trial basis before taking the time to integrate them into these systems. Ultimately giving workers access to your management tools will only many your life better, but you must weigh the relationship to see if it will be an ongoing relationship or a “here and there” type of deal.

If you are even thinking about your company culture you are way ahead of most people. Let them know what your company is about. For us, things like staying within Google Webmaster Guidelines and providing exemplary support are some of the things we can do to set ourselves apart from our competition. It is important to let your remote workers know this, so that they don’t get the wrong idea about who you are or what you are about. Things like giving them a company email address or social network access  is something earned, not given automatically.

Scenario 1: Last year I was working on a new client site using a custom CMS that I have not worked with before. I made a few changes to a file, saved it and poof – website went “white.” Unfortunately it was 2am and most of my team was asleep and the stack was in ASP / using some database I never head of on a Windows server. I looked to Skype for help and within about 20 minutes an associate from Seattle was able to debug and fix the issue.

Scenario 2: A few months ago I encountered a client with a massive website. Over 100k indexed pages and we were doing a migrate to a new platform. I contacted an associate that specializes in working with large amounts of data, and asked him if he could help move the content. About 48 hours later he came up with a script that would grab the content, parse it, and drop it into a the new database complete with formatting, permalink, and titles.

Scenario 3: One of our larger clients was having an event that was going to get some national attention. I contacted several bloggers and editors to notify them of this event to see if they wanted to have first crack at it. One blogger was able to negotiate a featured news spot on a nationally recognized news site, and the post ended up getting 1000’s of shares.

Scenario 4: Woke up one morning to find an email from a client who had their server hacked. While we aren’t contracted to fix this, I felt obligated to help. An associate that is a P/T Linux admin sprang into action, isolated the data, removed the malware, and restored the site from a backup.

I do not discriminate when it comes to meeting new people.The majority of the time I meet new people on Twitter, Google+, or LinkedIn. I’ve also been meeting a ton of people on Inbound.org and Hacker News in the past year.

Some of the most talented folks I’ve met have come from the most unorthodox places. For instance my old proxy provider from 10+ years ago is now one of my most trusted PHP developers. I’ve met some extremely talented and efficient people from Fiverr, Dribbble, and even Fiverr.

I tend to stay away from places like Odesk or Elance. To me it is a sea of mysterious talent that I just do not have the time or energy to sift through. My philosophy on those places: if you are even half good at what you do, you wouldn’t need to be there.

Weeding out the weak

This might sound harsh, but anyone that is not all about business is swiftly cut from my network. Sure I like to joke around and look at stupid videos sometimes, but if that is all you are about I do not have time for that.

The following people that possess these characteristics will be removed from my network:

The following people that possess these characteristics will be put on probation:

I’ll do the same thing for group chats that don’t focus on productive thinking. Again, I don’t mind joking around but if it is nothing but a nonstop stream of nonsense you get cut.

It is important to quickly recognize when a work relationship is not going to work. Sometimes you have 2 talented people but they just don’t click with one another, and that is fine too.

Stick around long enough and you’ll get invited to a number of private email lists, forums, and Skype groups. These groups are an excellent way to run ideas past people, brainstorm ideas, and get honest feedback before launching a post or product. I wrote a post a few months ago about using Skype as a social network.

In my experience the best way to get into a Skype chat is to start one yourself. Start by inviting 2-3 people on your level to a new group. Let them know what the topic of the group is Skype groups with over 10 people usually get kind of rowdy.

I’ve been part of one very selective and private Skype group for years and would say it has been the most valuable resource I’ve relied on in the last 5 years.

Be good to your fellow man or woman

In general, I try to treat the people that I interact with well. I don’t beleive in talking down to or belittling people. Just because I am the one dishing out work does not mean I am better or worse than that person. You’d be surprised how far a little courtesy goes. Most people, including myself aren’t always concerned with who they can make the most money with. People want to be happy, treated with respect, and appreciated. Last year I had someone dig me out of a hole half a dozen times and in one case save me from utter humiliation. Small tokens of appreciation at the end of the year are always appreciated.

Pay everyone immediately, or even before the work has been done. That way when you wake them up at 2am with an emergency, they don’t have a doubt about when and if they are going to get paid.

If you are saying “Nooooo Patrick *never* pay they before work...” then you aren’t meeting the right people. If you have to hang money over people’s head in order to get them to do their job, you don’t have the right team in place.

I try to get to know everyone a little bit on a personal level that I am working with remotely after I’ve worked with them for a while. Sometimes typing back and forth dehumanizes the interaction and can great a very impersonal relationship. I like to ask what is going on in their area of the world, how their family is, and what they are working on personally.

I’ve done a lot wrong in this industry, but somehow I’ve managed to build an army. I attribute this to being kind, fair, and professional with people.