It was only a matter of time before something like this was created. I mean, they already index every site on the internet, so why not make a tool to make them?

In a recent blogspot post by Google/Doubleclick, they announced:

Google will soon launch Google Web Designer, an HTML5 development tool for “creative professionals.” The service, Google says, will launch within “the coming months” and is meant to “empower creative professionals to create cutting-edge advertising as well as engaging web content like sites and applications – for free.”

Obviously this is going to mean huge things for digital advertising, especially with all the new crafty HTMl5 widgetry we are seeing all over the place. While this is mainly geared towards creative professionals such as PPC creatives, I’d like to focus on the possibility of a well thought out site builder that is of quality.

Site builders are littered throughout the internet.  Every time we get a new client and ask what their site is built in, and they respond with: “Godaddy Site Builder” or something of that nature, we generally cringe.

In fact, there have been cases where these site builders have produced sites that are so bad, that we’ve opted to create a new site for them, for free – just to have something that works.

Google made a “meh” attempt at this a few years ago with “Google Sites” (sites.google.com).  This platform was not very well received, although one of the most memorable Google Sites website was Eric Schmidt’s daughter, Sophie who wrote about her trip to North Korea.

In case you haven’t seen Google’s current web design product, this is what you are missing (or not really): 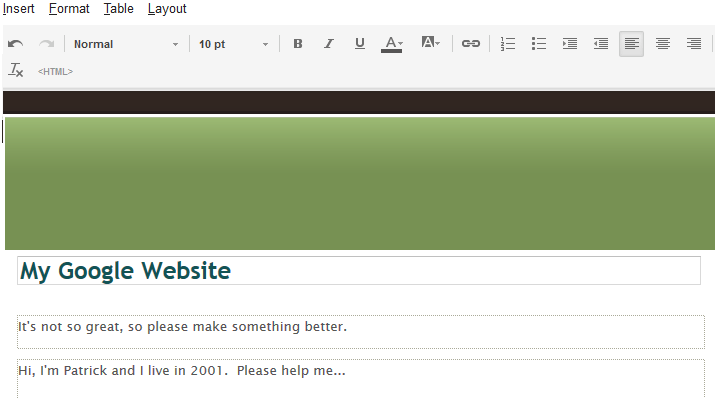 Google’s latest attempt at a web development tool. Not so much.

Anyway, it is clear that Google want’s a leg in this race, and to make up for their last attempt.

Do we really need this?

I can’t really think of many scenarios where you would need to use a site builder.  With CMS’s being so user friendly, and sites such as Tumblr and WordPress.com popping up, why does the world even need this.  It is one of those markets where there are tons of competition, but if it went away no one would miss it.

This is clearly not geared towards the “techie” or “coder” market.  It’s a very small niche geared towards people who want to create a website on their own, without learning any coding or scripting, that wants a product for free.

WYSIWYG editors have really had a bad rap since the beginning of time.  Anyone who knows a speck of HTML knows that they are bulky, produce poor quality websites, and very difficult to manipulate.

But they are gaining in popularity.

Wix.com actually offers a fairly decent product.  Do a Google query for “powered by Wix” and you will see a few fairly nice examples.  They are not the most SEO friendly option, but you can at least make a website that looks decent.

Have you heard about Adobe’s new product Edge Reflow?  Adobe has a long history of creating powerful design products, and has had the most successful web design product on the market to date (Dreamweaver).  Although Dreamweaver was not an online WYSIWYG editor, the lines between online and offline are thinning and this new product just might smash that barrier altogether. 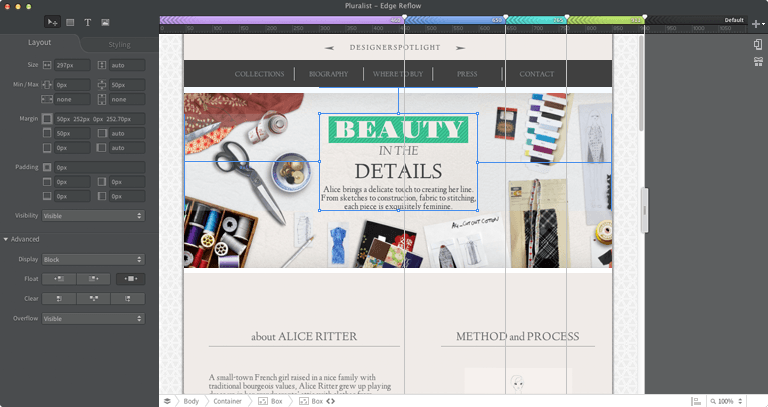 Wow!  I mean, it looks like a space ship.  Adobe is clearly listening to its customers and focusing on responsive layouts and project management.

There are a ton of other competitors out there as well, and also a number of WYSIWYG ecommerce platforms popping up.

It needs to be better, a lot better

Whatever it turns out to be, it’s got to be a little bit better then something that looks like a Google Doc published to the web.  Anything short of awesome is going to be looked over and sent to the Google graveyard to die with the rest of their failed products.  I’m not bashing Google either, they’ve obviously had much more success than failure.

What this is basically starting to sound like is a CMS, which would be very interesting if Google actually produced.  In the news release that mentioned Google Web Designer, there was a strong emphasis on HTML5, which is a really good sign.

The last question I have is will this solution be hosted?  People want their own domain, there is no stopping that.  I think one of the main reason (other than the poor design) that people did not opt for sites.google.com is because they could not choose their own domain, and had to settle for being hosted on Google’s mystery server.

If Google wants a shot at this, they better thing this through start to finish.

Nevertheless, my ears perk up any time Google releases a new web product.  I can’t wait to see what this turns out to be, and really have high hopes.

Good luck Google Web Designer Developers, excited to see what is in store!