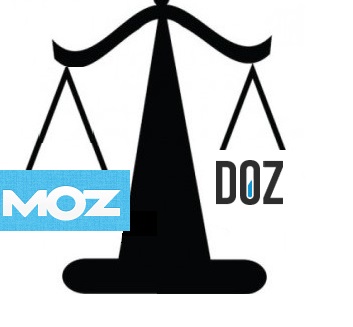 If you’re hip to the SEO scene, surely you’ve noticed that SEOmoz has re-branded to simply: Moz.

Anyone who has ever done a re-brand knows that it isn’t easy, and there are always unforeseen issues that could come up.

So they did what any other enterprise level company would do: throw some lawyers at the problem.

Moz is has filed a petition to cancel the trademark stating that “Doz” would cause confusion within the industry.  The petition was filed several months ago, but this has all just come about right after the SEOmoz / Moz rebranding.

Doz filed their trademark back in December of 2012 and probably never considered that Moz would be named as such in the future.

This will surely be a case of who can throw the most money at a situation, and will be a huge waste of time and effort on both sides of the fence.

In my opinion, Moz should really just let it go. They obviously didn’t intend to copy the name and with such a simple name there are at least 25 variations of Moz:

On another note, Moz has definitely won the page load speed war, coming in at sub 1 second load times while Doz takes 3+ seconds to load.