Earlier this week, Google launched an exciting new feature within their search engine called “in-depth articles.”  These results are designed to help you learn more about the subject from a quick glance.

Clearly there is a benefit to having your site featured as an in-depth article being that these snippets take up a much larger block of real estate than the normal SERPs.

Although there is no sure way to get your site listed as an in-depth article, Google has provided some guidelines to help your site implement the proper markup.  Google also noted that you don’t have to be a big brand in order to qualify, they specifically mentioned smaller bloggers having the opportunity for this as well. 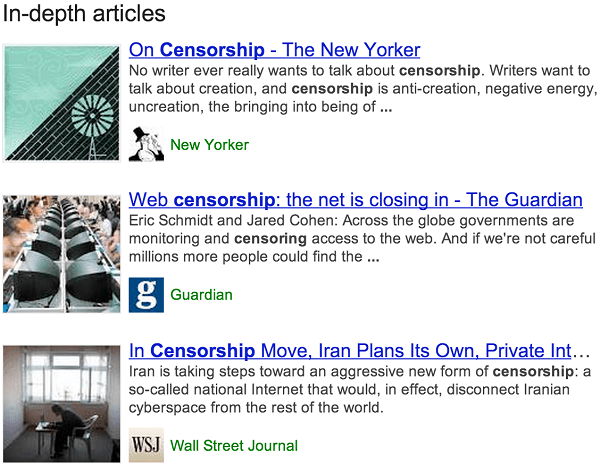 If you are a savvy webmaster, you probably want to know how to go about throwing your hat in the ring for this sleek new feature.

Below we’ll attempt to give some actual code examples of how to go about doing so.

A while back schema.org released the new markup to implement a logo.  Up until now no one really saw a use for this implementation however in Google’s official release they are now saying that the logo used within the new in-depth article feature will be taken from the schema markup for logos.

And of course be sure that all of your markup is validated and has correct syntax.

In Google’s official release on the Inside Search Blogspot, Google’s own  Pandu Nayakw wrote:

“I’m happy to see people continue to invest in thoughtful in-depth content that will remain relevant for months or even years after publication. This is exactly what you’ll find in the new feature. In addition to well-known publishers, you’ll also find some great articles from lesser-known publications and blogs”

While I haven’t personally seen a ton of in-depth articles appearing in the SERPs so far, I am sure Google will gradually roll this feature out over the next week, as it usually does for all of its other algorithm updates etc.

A Glimpse Into The Future of Authorship

Right away this set off some major alarms on my Authorship radar. Google clearly stated that “Authorship markup helps our algorithms to find and present relevant authors and experts in Google search results.”

This has been the first time (that I have found) that Google has admitted to using authorship as a ranking signal.

While this probably just means that Google will be using this data to help rank in-depth articles, it definitely means that they are starting to test things.  It also appears as though they are testing the rel=publisher a bit more and in-depth articles is just manifestation of it all.

Anytime Google releases a new update that changes the physical layout of the SERPs, SEO’s start to worry about possible implications.

For one, this will absolutely affect the CTR of the SERPs that in-depth articles appear on.  Like authorship implementation in the SERPs, webmasters around the globe noticed increased and decreased CTRs of their results.  One can only imaging what something like this will do to the CTR’s of the in-depth articles themselves as well as the articles that share the same page as them.

Confusion on Placement of In-Depth Articles

According to an exclusive with a Google spokesperson and Search Engine Land, in-depth articles will not be exclusive to larger brands and the block will appear in the middle of the results pages.

Yet another Google spokesperson Jake Hubert told GigaOM that in-depth articles will appear on the right side of the page alongside ads and the other search features Google has been adding.

I suppose it will be somewhere in the middle alongside the right side of the page?

The confusing part is from what we have actually seen, they will appear on the center/left hand side.  All I can say is LOLz.

Another Google spokesperson told PCMag: “We look at a variety of algorithmic signals designed to surface in-depth articles. We don’t have more details to share on the particular mechanisms…” Which is business as usual for Google, they aren’t showing their cards or giving us any details whatsoever.

And really I’m happy about that, I don’t want every blackhatter from here to Poughkeepsie having an in-depth article promoted on prime SERP real estate.

Over the past year, Google has really focused on providing quick answers without users having to click on search results.  In-depth articles is just another step in that direction in a way.

Per usual, Google will most likely highlight the best of the best content as an in-depth article.  This means, the articles that have the most shares, the best G+ engagement, the most quality backlinks, and of course proper markup.

My advice to any SEO who is looking to get in the in-depth article game is to follow Google’s instructions to a T, and to find commonalities within the chosen in-depth articles.  We are very much looking forward to doing this as soon as the update has been rolled out in full.

In other Google News, Google Drive has now added the ability for Drive users to highlight and link to a specific site, Google search result, heading, or bookmark within your document or even another file within Google Drive.  This update is also rolling out today and users can test this new feature by highlighting content and hitting “insert link.”