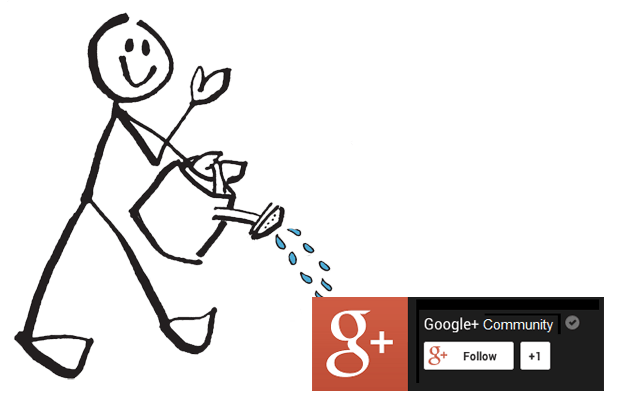 It is no secret that more and more people are joining Google+ communities.  Even for advanced users, G+ Communities can be kind of a grey area.  This post will give you a few solid tips on how to promote your Google+ Community and to hopefully attract more visitors.

Growing your Google+ Community isn’t as straightforward as it seems.  There are a number of different ways to get people involved, both inside and outside of Google+.  A G+ Community is kind of a weird entity, and it can be tricky if you don’t know your way around Google+.

That Google+ is really new.  Despite the inflated numbers floating around saying it has the “2nd largest user base” only 2% of the users are actually active.

That said, just know that there just aren’t that many active people on Google+ at this moment in time. Here are some examples of some of the niches that have popped off on Google+ so far:

Not everything is going to take off right away on G+, so don’t get upset if your Community only has 4 users after a few weeks.

Make Sure Your Group is Properly Manicured

Simply creating a Community isn’t enough.  Find 5-10 of your friends to post so it doesn’t look like it is just you by your lonesome on there.  Fill in all of the required and optional information, and find a great pic for your Community.

Be Exclusive and Moderate

“Technical SEO,” one of my favorite Google+ Communities has gained much of its success for being strict to their guidelines, and very exclusive.  Just like traditional forums, no one wants to be involved in a community where anyone can join and anyone can post whatever SPAM they feel like.  Have rules, moderate, and be careful of who you let join.  Be clear about your rules as well.  Don’t ban people for doing something you don’t like if it is not posted as a rule.

A lot of the best forums and communities start off as a democracy.  Ask your community what they think the rules should be and stick to them.

This might seem kind of obvious, but make sure you update your own status about what is going on in your Community.  It helps if your followers are related to the niche that your Community is.

This trick also works.  Send out a Tweet or a Facebook status update with your new Google+ Community.  There are a lot of people online right now looking to get involved with Google+, so you just might attract some new people.

I shouldn’t have to elaborate on this one, but I will.  Here is the deal, different people log on at different times.  There are also different time zones in this world as you may be aware.  Updating often will ensure that the users that log on less frequently are more likely to see your updates about your new Google+ community.

Providing value can mean a number of different things.  It can be something really shallow like a hilarious gif or something highly intellectual like a whitepaper on a new exploit.  Whatever the case may be, make sure you are not just regurgitating content and posting it onto your Community.  Here are a few quick ways to do this:

Promote it on websites, forums

You really have to be careful about this one, but you can promote your Community on other websites and forums.  Be sure to check the rules of the community, most forums do not allow the promotion of other communities.  Throw up a Community badge on your website and anywhere else you can think of.

We are now seeing Google+ Communities showing up in the SERP’s, as well as individual posts within the Communities.  As you may already know, Google uses backlinks one of the primary ways to rank a website.  There is no reason why they wouldn’t do the same with a Google+ Community.

Email people about it

Next time you do an email blast throw a link to your Google+ Community.  It can’t hurt.

None of this worked, these tips suck

No, you are not trying hard enough!  I have a community with 300 active users right now, and I grew it to this size using only the tips within this article.  It has taken about 30 minutes a day every day for the past few months.  Like anything, you have to stick to this if you want it to happen.  A Google+ Community won’t really take off on its own unless you put the work into it.