Think Google is Favoring Brands? Stop Linking to Them!

Home » Think Google is Favoring Brands? Stop Linking to Them!

Think Google is Favoring Brands? Stop Linking to Them!

It is now more clear than ever that Google is favoring mega-brands in the SERPs.

I’m not saying this as a conspiracy theory or that they are doing this because they have 8 figure Adwords budgets, but it is a fact.

And it’s not Google’s fault, it is just their algorithm.  Google favors websites that have the most (and best) links, amongst other things.  Google has also clearly shown to have favored brands in their new in-depth article feature.

Earlier this evening I was drafting a post that had to do with Google itself, and I was looking for a quote by Larry Page where he said employee bonuses for 2011 would be tied to Google+’s success.  So I queried a few keywords and found some very familiar, and predictable results: 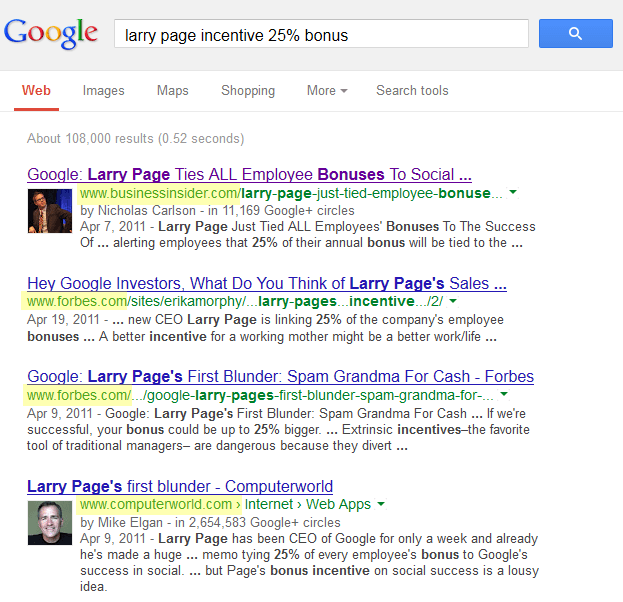 Google didn’t rank these people, we did.

These sites own the top 4 because of people like me, and you.  We link to them over and over again.  We share them on our social media accounts and send them to our friends in emails.

Joe Schmoe’s news blog isn’t up there because it isn’t as popular as these.

Change Your Attitude About Linking Out

The next time you are drafting a post and need a link as a reference, look beyond the mega-brands and dive into the later pages of Google.  Chances are you will find some great posts from some very interesting authors about your topic.

Link to lesser known sources.  Bloggers aren’t linking out to other websites the same way a student writes a term paper.  We aren’t looking for the most credible source, we are merely looking for someone else who backs up what we are saying.

If we all start linking out to smaller blogs and websites, we can collectively change the way that the SERPs appear.  If everyone took the extra few seconds to do this, we would see a dramatic change in the SERPs.  Sure the mega-brands would dominate, but we would see a nice sprinkle of average Joe bloggers in the mix.

This type of karma will also eventually come back to reward our smaller sites as well.

I’m committing to doing this from now on.  I will no longer link out to Forbes or CNN just because it is convenient.