No, Google Did Not “Ban” These Words

Home » No, Google Did Not “Ban” These Words

No, Google Did Not “Ban” These Words

A few days ago we saw a dozen or more posts about Google and Android banning certain words with all sorts of link baitey headlines stating things like:

This just didn’t sound right, so I went ahead and downloaded the source list from the Android source code.

I grabbed the Android English dictionary and isolated the 1400 or so words that were supposedly “banned” and started to look through them.

The first thing I noticed was the fact that their were random category parameters assigned to most words.

For reference, here is a raw paste of the list in plain text and a list of the words without parameters.

The banned Android list actually only has about 184 words marked as offensive.

The rest of the words did not have a category assigned to it.

For instance, Google has not banned the word “AMD” it is merely marked as an abbreviation.

Next thing I did was pull out my phone equipped with the latest version of Android.

I’ve known this for some time from learning about Google auto-complete within the search engine, but Google will not recognize or auto-complete a good number of offensive words.  In this case I tried a handful of the “offensive” words within the list and found this to be true. 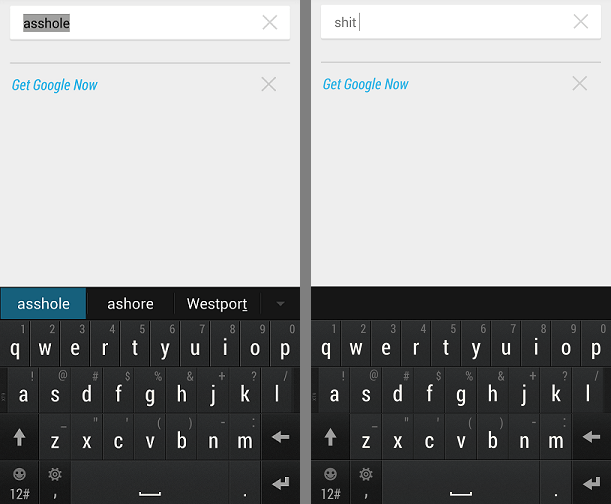 I then tried both speaking and typing the word “Demerol” a word categorized as “medical” on the list, and found it to be good to go.

For one reason or another, Google has added these words to the auto-correct dictionary however only a small fraction of them appear to actually be “banned” when you actually try to use them.

Am I missing something here?