Many of you might have heard the latest breaking news about Getty Images, probably the worlds largest stock image library and how they are allowing free use of  (most of) their images with a new embed tool.

But what does this really mean?

For starters, lets be clear Getty Images is still charging for stock images. Getty Images currently has about 150 million photos. Of those 150 million, 40 million will be “free to use” if you are willing to use their embed tool.

Getty released this tool in an effort to combat their massive problem of people stealing their images. They say people aren’t copying the images directly from their site, but rather right-clicking on images contained in other websites and saving them to their own device.

Here is an example of what the new embed tool looks like: 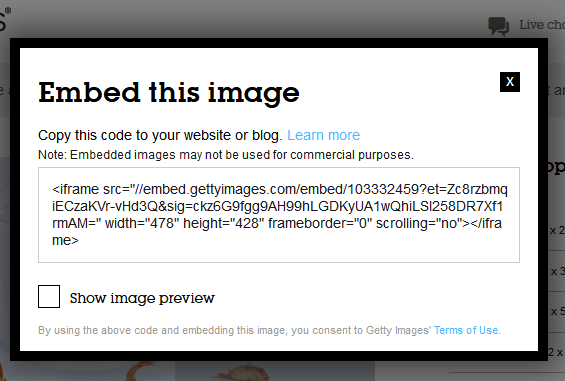 In this example if you were a blogger you would have 2 options:

In addition to the Getty Images logo that will be placed on your website as well as proper attribution, 3 buttons are also placed within the iframe:

A Tumblr button to share the image directly via Tumblr.

An embed button that will allow other bloggers to share the same image on their own blogs, of course with the same functions embedded on their own website.

It’s all about the backlinks

Kind of, but not completely. Someone high up the food chain at Getty Images got hip to the fact that backlinks = rankings = revenue and probably realized that they may as well get a backlink if people are going to be copying their images anyway.

Although Getty Images really seems to have owned the market, they are fighting for every SERP result just like everyone else.

Was the old revenue model just not working out for them? Do Getty Images scare letters really not scare anyone?

But it’s really about the traffic

Getty Images will most likely receive a huge influx of traffic from this new maneuver. As a result of the link attribution and logo branding placed under the image, website visitors will click through to Getty Images website which may equate to new customers or repeat customers.

If this works out the way Getty Images is probably hoping it will, Getty will put itself in a very good position to receive great referral traffic from all sorts of new website sources.

Prior to this, once someone bought an image from Getty, Getty (and the author) would receive very little attribution and most definitely no link to their website.

New Features in the Future

A Getty Images representative noted that there might be plans for the future of this embed tool.

Senior VP Craig Peters stated that in the future the tool might allow Getty Images to do things like advertising overlays, paid features, and sharing limits. All of which to me sounds pretty terrible for the user and webmaster.

If you look a little closer at the terms of service (see snippet below), one might think that the images could one day be replaced by an ad if Getty so sees fit.

What will Google think?

Matt Cutts talks very openly about widget links in a Google Webmaster Help video in late 2013. In addition to the fact that he says they should be no-followed, he states that they probably will not carry nearly as much weight as freely given editorial link.

We talked a little bit about this last week when we noticed Yelp was requiring webmasters for a do-follow link within their terms of service.

Attribution is fine and everything, but Google has becoming more and more strict with policing their guidelines, especially for top-tier companies in the public eye.

Perhaps someone will get hip to this and play a defensive position and add a “nofollow” attribute to the iframe.

It would be terrible if this new model backfired, penalized the entire site and caused havoc to their entire model.

If this were me and I was in charge of something as potentially epic as this, I’d probably throw in the no-follow attribute for safe keeping.